#LGBTQHatesTrumpParty GIFs That You Need To See

I know, I know, we’re writing about him again. The Donald, Mr. Tiny Hands, Mr. 3 Wives No Women. It all seems the same. But this time, I promise, we actually do have something to talk about. In the wake of the Orlando attacks, Trump (obviously) blamed Muslims for the attacks on the Pulse Nightclub but the victims of the tragedy, the LGBTQ community have been quick to denounce the Republican presidential nominee as something they aren’t too fond of. 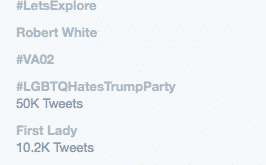 The LGBTQ community is great at social media, in fact, they might be the only ones who are better at it than Donald Trump. Because, whether you want to admit it or not, the Donald is pretty freakin’ good at social media.

Is there nothing, at all, that can’t be done with this little tiny GIF of Trump?!

Get it, it’s Freddie Mercury, and if you don’t know who he is, then you better get on Wikipedia now.

I'm late to the party and a straight ally but I'm not missing this one. #LGBTQHatesTrumpParty pic.twitter.com/lqpZzHvXIS

And so it passes, another fun Donald Trump hashtag that we will always look back on fondly and remember the time when he was running for president. Even if he does become president, we’ll still look back on it fondly and remind our children. Hope all you guys in Orlando are OK!