by Kim LaCapria 11 years ago9 years ago

Weinergate, as the scandal surrounding embattled New York congressman Anthony Weiner has come to be called, has sparked anew the panic of accidental and inadvertently intentional online overshare.

The site Retrevo has posted a study indicating that an unsurprising 35% of Americans have social media regret, with varying levels of personal static caused by information that have shared online. iPhone users top the overshare stats, though it’s not really explored whether enhanced share capability is responsible, or perhaps the folk that invest in smartphones are more likely to share sensitive data online they may later come to regret.

iPhone users came in at a 51% overshare rate, versus 45% of BlackBerry Users and 43% of Android users. Retrevo posted two more handy charts on the survey results, illustrating age of those reporting the overshare as well as the reported consequence: 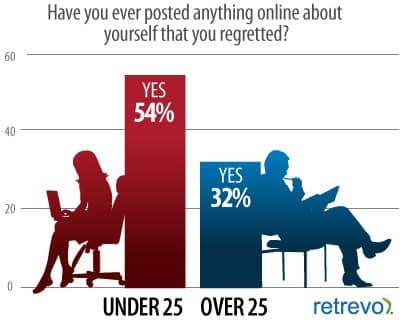 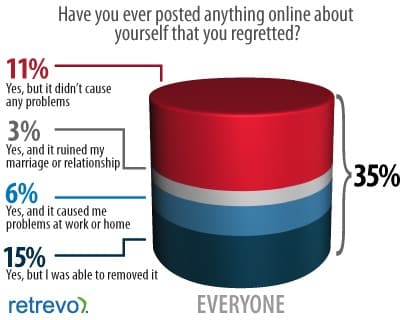 One of the staff at Retrevo reminded readers of the existence of screenshots:

“The information people post to sites like Twitter and Facebook can easily go on to have a life of its own,” says Jennifer L. Jacobson, Director of Public Relations and Social Media for Retrevo.com. “You don’t always know who’s following you and just about anyone can take a screenshot of your post, save it, and share it with the world.”

Have you ever posted something online that you later regretted? Do you think that this circumstance is inevitable, or do users need to exercise more caution when sharing info on social networks?