Harambe is the silverback gorilla who was fatally shot last week after a kid fell in to his enclosure last Saturday. The #JusticeForHarambe hashtag quickly began trending across social media platforms and animal rights activists have staged #JusticeForHarambe protests in Cincinnati outside the zoo. Here’s a clip from NBC that goes in to depth about the incident.

Most people are saying that it looked like the gorilla wasn’t trying to hurt the boy, and while they are upset with the zoo for shooting the animal, they are more angry with the parents for letting the boy into the enclosure at all.

Don't take your kids to the zoo if you are unable to keep an eye on them at all times. Simple. #JusticeForHarambe

Sums it up perfectly. #justiceforharambe pic.twitter.com/Ika95fM9Kv

A Change.org petition was founded to hold the parents responsible and states:

“It is believed that the situation was caused by parental negligence and the zoo is not responsible for the child’s injuries and possible trauma.We the undersigned want the parents to be held accountable for the lack of supervision and negligence that caused Harambe to lose his life.”

At this point the petition is only a day old and it won’t be long at all until it reaches 200k signatures. 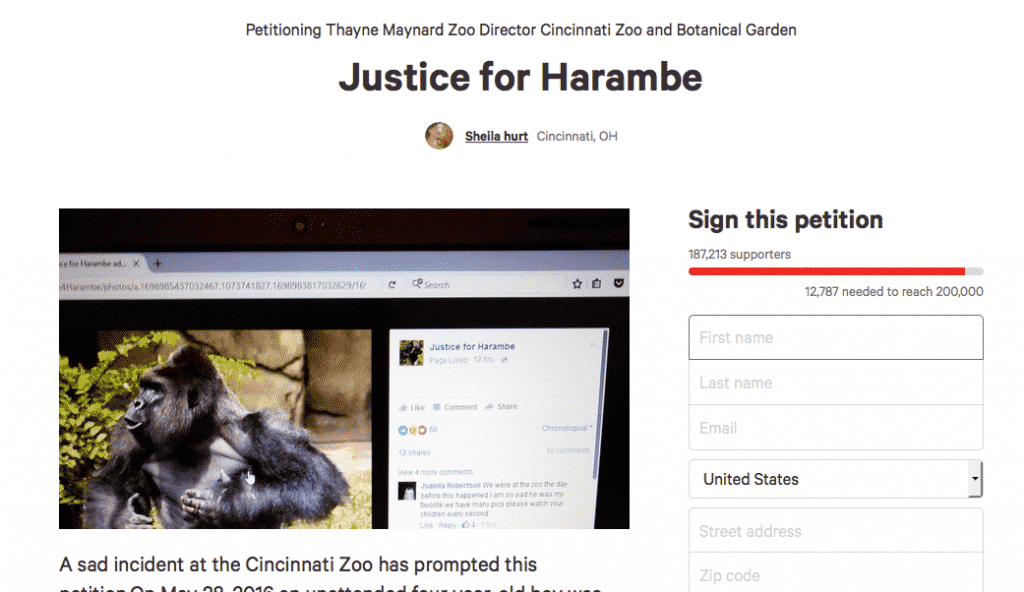 PETA has staged protests outside the zoo and is calling for a boycott of the zoo. The group is adamant that it’s unjust for animals to be held for human entertainment. A primate expert with the group said that it appeared that the animal was trying to protect the boy and referenced other similar situations where this sort of incident has occurred.