Twitter Wants To Find The Guy Who’s Fiancee Is Cheating...

Twitter user @OwenRestall put a certain Graham and Samantha on blast on the social media site, tweeting that the lady in question was doing the nasty with one of his friends in Newcastle. And the tough thing was, this woman was supposed to get married in a few day’s time. Scandalous! 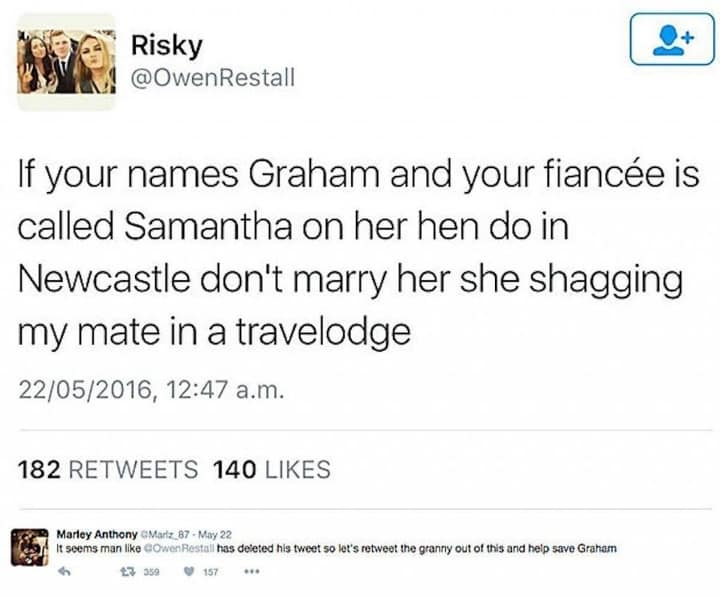 Just like it says in the teeny-tiny print above, @OwenRestall deleted this tweet, but the internet remembers, and everyone loves a juicy whoodunnit. the Tweet has since been screencapped and retweeted in hopes of reaching the cuckolded groom-to-be.

Anyone know what room Samantha is in?? pic.twitter.com/BfFs03wcGL

Seriously, the erring pair could have at least had some delicacy and class.

And #PrayForGraham became a thing.

Was #Samantha ever found? #PrayForGraham ?

Did they find Graham? Any photos of Samantha? #PrayForGraham

@ScottGShore awkward when he finds out through your tweet? hahaha??

Someone posing as the slighted “Graham” showed up on Twitter and fired off some hilariously fitting tweets on this unsavory occasion.

I faked every orgasm!

Why are people laughing at my pain?

It’s all fun and games, until someone who happens to have the same name as Graham speak up — and then things get serious.

Guy Gets Revenge On Cheating Girlfriend, Posts Breakup To Twitter