by Dan Evon 12 years ago10 months ago

What better way to find out what the people want than to, you know, ask them? Iceland is opening the floor to anyone with a Facebook or Twitter account in order to help draft its new constitution.

Iceland is recovering from a massive financial collapse that shut down its banks and government. Now that the country is starting fresh, it’s using social media to get ideas from Icelandic citizens. 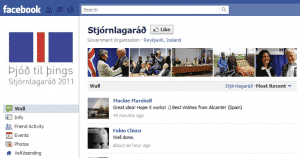 “The Constitutional Council emphasises an open communication with the Icelandic nation and has given the people an opportunity to participate in the formation of a new Constitution of the Republic of Iceland. The Council’s work can also be seen on the major communicative media such as Facebook, Youtube and Flickr.”

The council, which has been working on the new constitution since April, has been posting constitutional articles on its website. People can comment on the articles, or join conversations about constitutional issues on Facebook. Council members are also posting videos on Youtube and using Twitter to keep people up to date.

“Every day short interviews with delegates are put on Youtube and Facebook… The webpage also has regular news from the Council’s work as well as a weekly newsletter. Advertisements are published in the media encouraging the public to keep track of what is going on and to make comments.”

A comment by a citizen may not impact the formation of the constitution, but then again, it might. But more importantly, Iceland is involving its citizens in the process and making sure people are aware of what’s going on.

“I believe this is the first time a constitution is being drafted basically on the internet. The public sees the constitution come into being before their eyes … This is very different from old times where constitution makers sometimes found it better to find themselves a remote spot out of sight, out of touch.”