Dear Twitter users, we know most of you are pretty alright people. You’re usually respectful, mindful of other people’s boundaries and feelings, and make it a point to be chill with each other. Keep doing you, that’s absolutely cool. There should be more people out there like you — in fact the world needs more people like you out there.

Unfortunately, a lot of people out there aren’t so awesome. In fact, it’s sad how some people we’re supposed to look up to just behave plain nasty online, and don’t even care who sees it. In fact, it’s as if they never bothered to think about the fact that the horrible posts, snaps, or videos they make are things millions of people round the world are going to see, share, and document for posterity. I mean, seriously, would you even want to be remembered for that? that’s just embarrassing.

So settle down, and listen to these two cautionary tales of bad behaviour and almost legal action. Think about how close they got to needing Family Law solicitors, and what could have happened in court.

Now, the last time we saw 50 Cent, he’d declared bankruptcy, and then posted all these images on Instagram of himself lounging around and playing with so many wads of cash. Not exactly his smoothest, nor his smartest move, amirite?

However, things were about to get worse for this rapper, all because he decided to pick on someone who couldn’t fight back. He shot a video of himself mocking someone who appears to be maintenance crew, accusing him of taking drugs before his shift. “He high as a mo**erf***er”, the rapper said. And then he went ahead and tweeted it — which he later on deleted.

The employee in question is on Andrew Farrell, 19, working at Cincinnati/Northern Kentucky International Airport. Farrell is on the Autism spectrum, and is seen here just starting out on his first day at work — and this sort of thing happens. 50 Cent was there in Cincinnati to promote a certain brand of vodka, but after the incident, bars and stores boycotted the product and puled the vodka off the shelves.

50 Cent later issued a written apology, calling it a misunderstanding, which Farrell was satisfied with. Farell’s family felt he needed to do more. They said that they would not take legal action if the rapper donates US$ 1 million to a GoFundMe page dedicated to sporting children living with  Autism. in response, 50 Cent donated $100,000 to Autism Speaks, a non-profit focused on “curing” Autism. Huh. 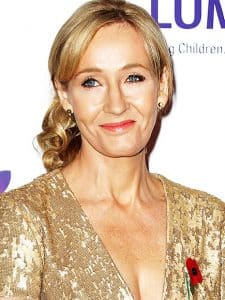 We all know what a cool, chill person JK Rowling can be on Twitter, and heck, we love her for that. She’s kind and encouraging with her fans, cordial when she needs to shut down false theories, and stands up for diversity and the LGBT community. However, the beloved Harry Potter author unsheathed her claws because someone decide to sling horrible epithets at her on Twitter no less, her own social media home turf.

Rowling was accused of defending “misogynistic trolls” by Natalie McGarry, the Glasgow East MP in the middle of a heated exchange on Twitter.

So how did this all start? Rowling tweeted her thanks to an account under the name “Brian Spanner”, an anti-Scottinsh nationalist who had previously said a few nasty comments. what did she say “thank you” for? This “Spanner” fellow raised money for her children’s charity Lumos. We do see a potential problem brewing here. but it’s always a good call to be polite and give thanks where it’s due.

And that’s where McGarry came in and tweeted: “You tweet support of a misogynist abuser. You talk of Twitter abuse and then “(metaphorically) cuddle up to trolls.”

To which Rowling responded:  “You aren’t some random hater, Natalie. You’re an elected politician and you’ve accused me of supporting abuse and misogyny.”

.@NatalieMcGarry And you need to provide proof that I support misogynistic abuse or you need to apologise.

The rest of it isn’t pretty.

.@NatalieMcGarry You don’t appear to understand how Twitter or defamation works. I’m going to help you out with the latter.

Someone needs some cream for that burn.

This whole commotion online prompted Rowling to warn the Scottish MP that she would take legal action. McGarry apologized three weeks later. Would she have had to seek help from a place like Solicitors Guru? Most likely, and how.

Lesson learned: you just do not mess with JK Rowling.

Here Are Some (Legal) Prostitute Selfies, Because Why Not [Photos]