The Fascinating Future of Human-Pig Hybrids

The Quest For Human/Animal Chimeras

In genetics, a chimera is a single organism composed of cells from different zygotes. In mythology, the Chimera was monstrous hybrid creature with the head of a goat, head and body of a lion, and snake for a tail. The word has disparate definitions, but the one concerning ethicists these days is the scientific quest to grow human organs inside the bodies of other animals.

“We can make an animal without a heart,” says cardiologist Daniel Garry, who also heads the University of Minnesota’s “chimera” project. “We have engineered pigs that lack skeletal muscles and blood vessels.” 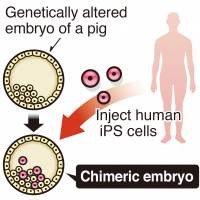 The idea is to create embryos that eventually grow into host bodies for human organs, such as kidneys or livers. By editing genes, scientists can change the DNA in, say, a pig. They engineer the animal so that their bodies are genetically incapable of forming a specific tissue.

Then they add stem cells from a human in the hope the human cells will form the missing organ. These organs could then be harvested from the pig and given to humans in need of an organ transplant.

“If it works as it does in rodents,” says Japanese researcher Hiromitsu Nakauchi, “we should be able have a pig with a human organ.”

In 2010, Nakauchi proved he could generate mice with a pancreas made entirely of rat cells. The work was a bold step into a field of research marred by grave ethical questions.

“What if the embryo that develops is mostly human?” asks Pablo Ross, a veterinarian and developmental biologist at the University of California. “It’s something that we don’t expect, but no one has done this experiment, so we can’t rule it out.”

David Resnik, an ethicist with the National Institutes of Health, put it bluntly: “The specter of an intelligent mouse stuck in a laboratory somewhere screaming ‘I want to get out’ would be very troubling to people.”

The worry is that human cells may create chimeras that are intelligent or even sentient. Though the likelihood of this happening is small, as domestic animal and human brains differ vastly in terms of complexity, it is still an as-of-yet untested scientific endeavor; though many chimera fetuses have been created, researchers have yet to allow any of them to come to term.

Until such a time when the ethical implications are understood more clearly, the NHS has banned funding for chimera research. Funding still flows in from other sources, including California’s stem-cell research agency, and the quest to engineer viable organs for human transplants continues.

National Academy Of Science Confirms GMOs Are Safe To Eat

Why We Haven’t Encountered Aliens? They’re All Dead [SCIENCE]