Fans Stick Hodor To Elevators and Things to Commemorate Hodor

Hodor, Hodor. Gone, but not forgotten. People love you, and they will never look at an ajar door the same way again.

Season 6, episode 5 of Game of Thrones broadcast Sunday and crushed the hearts of millions of fans worldwide. It wasn’t enough to grieve on cyberspace — people had to take it well into the real world. And how.

Take these cleverly-placed stickers, for example:

Okay, so maybe that one wasn’t so clear the first time… How about this one?

Yes. Yes, this is us with all the feels right now.

Oh, that wasn’t enough hurt for you? How about this one?

Don’t you dare shush him, Bran! This was entirely your idea!

Meanwhile, more tear-stained rage is sent George R. R. Martin’s way, as it was later revealed that he had planned for Hodor’s death from the very beginning. (Gasp! You monster!)

George GETS death. Maybe a little too much. By @maxknobs

Please don’t feel bad, fans. Hodor’s actor Kristian Nairn loves all of you. He even shared this insider look at the script he recieved as they were taping an old episode. (Caveat: Alas, the tweet no longer exists, but Mashable was kind enough to provide us with a screencap.) 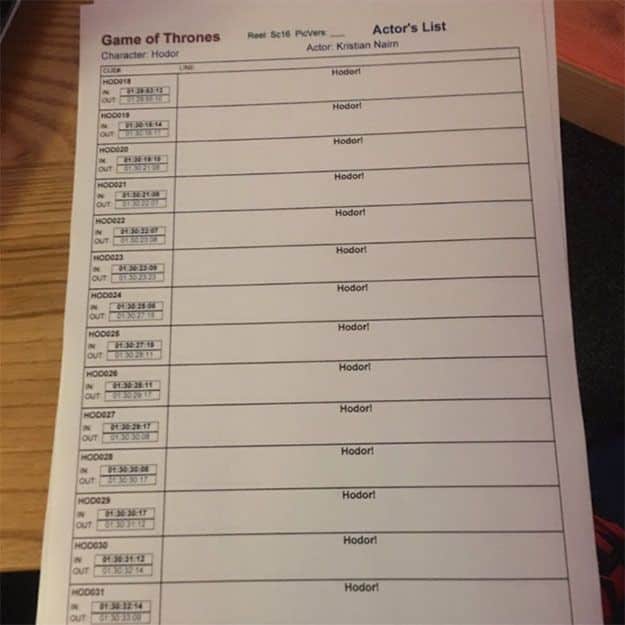 Thank you for ALL the lovely messages today guys. I’m literally overwhelmed. I love you all for real X

We love you too, Kristian! Thank you for giving us a character we can all root and ugly-cry for.

Hodor Holds Door; Twitter Grieves, and You Need To Cry, Too

Atticus Finch is Now A Racist, Everything is Ruined [Twitter Reacts]