Guy Takes Their Cat To Prom And The Internet Loves...

A good number of you readers out there have had to go through the nerve-wracking anxiety of asking someone out to the prom. And, if as misfortune would have it, no one gives you their “Yes”, it’s either a) go stag, or b) stay home and soothe yourself with a whole pizza/ a movie marathon/ the Internet. (Some of you may have actually welcomed the idea of not going to prom and dome something equally awesome that night, and if so, more power to you.)

One Imgur user’s brother, alas, was unable to get himself a date. So he decided this was one night he was not going to let pass him by, he took the best date his entire level had ever seen: his cat.

He couldn’t find a date.

Look at that. Just look at that! The way their cat just looks at her human with total adoration. The pride in this guy’s face as he cradles their beloved cat in his arms. Just how adorable is that?! If that doesn’t melt your heart, I don’t know what will.

Caroline Steingard, 20, shared this image of her 18-year-old brother Sam with their sweet cat Ruby on the image site. It went viral overnight, with more than a million views and shares at this moment.

Ruby wore the sweetest pink kitty dress with floral accents on the bodice. the dress was matched with a pair of tiny chucks in the same hue, because you just can’t compromise style and comfort with a cat. 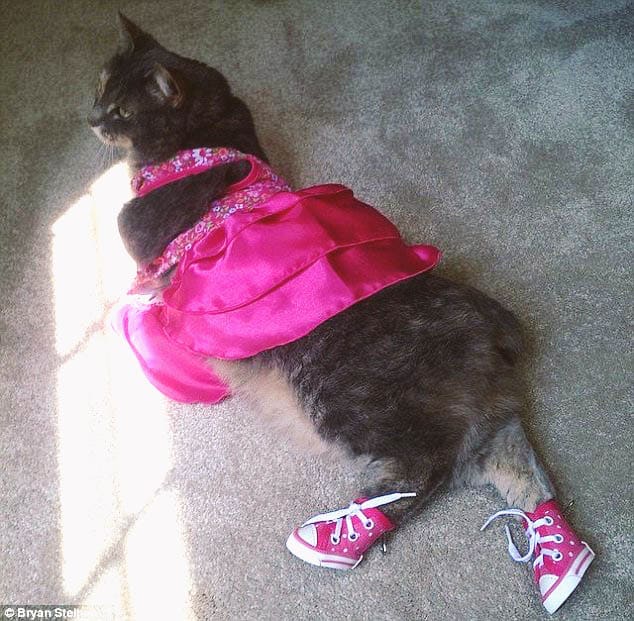 Commenters were over the moon for the pair.

‘First of all, your brother is cute af and the girls at his school must be nuts/blind/both,’ wrote one commenter. ‘Second, your kitty lurves him, hope they had fun.”

One more commenter chimed in, ‘I hope that someday someone will look at me the way she looks at him.’ #Baegoals, everyone.