A happy belated greeting to all the Star Wars fans out there! May the fourth be with you!

Early last year, Twitter proudly introduced emojis that celebrated the coming of the newest installation to the Star Wars Saga — “Star Wars: The Force Awakens”. Thanks to Disney, we can all now enjoy the excitement, action, and wonder of this movie — courtesy of cute little emojis! (I don’t know where to get these custom pictographs, but I want them in my phone, stat!) 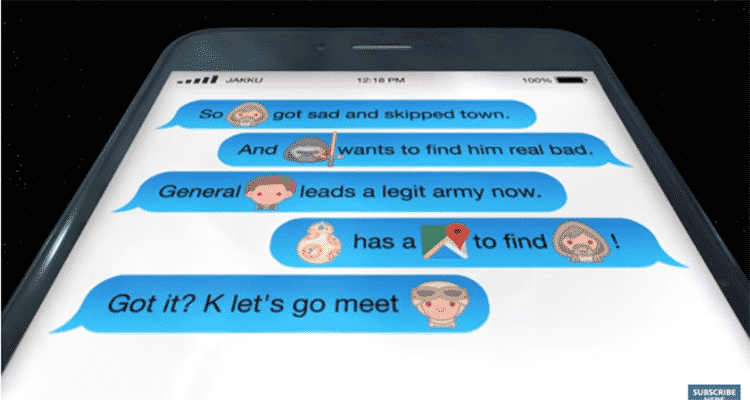 Total props go to Disney’s creative animation team for thinking of the best ways to translate the world of Rey, Finn, and Poe Dameron into text balloons, space dogfights literally on screen (hurrhurr), and many other elements. Case in point: the video open with a smartphone on a slant, laying the current facts of the universe text-style — very much like the way the movie’s iconic opening features the scrolling paragraphs George Lucas had so preferred.

All your favorite characters are here: action girl Rey, ex-Stormtrooper Finn, living legends of the Resistance Han Solo, Chewbacca, and now-General Leia Organa. Even Kylo Ren and Co. are present, in hordes of Stormtrooper helmets and bombs a-plenty. (Tiny Stormtroopers are just the cutest! But tell them I said that.) Something even spoiler-riffic happens! (Even that, I’m not going to spoil for you. You’ll see.)

There was one character, however, whose absence could be deeply felt by the staunchest Star Wars fan. Where’s Poe Dameron’s emoji?! We demand answers! Okay, but the thought of having his emoji is something we’d actually want more.

So prepare to be taken on what could be the cutest movie summary ever, courtesy of “‘Star Wars: The force Awakens’ As Told By Emojis”. Take it away, Disney.

‘Star Wars: The Force Awakens’ Has Internet In Its Force Grip [Twitter]