MySpace’s Tom Anderson has often been held up as the poster boy for the category of runner-up, as we all recall the fall of his site to the now all-encompassing social networking giant Facebook.

MySpace Tom has been the subject of many parodies since, as everyone seems to assume the social network pioneer feels slighted at the cautionary tale his company became — languishing in a years-long death spiral and embarrassingly lacking a buyer as its price plummeted time and again once News Corp. put it up for sale.

Given the reach of this Tom from MySpace Is Sad trope, it’s not surprising one of Anderson’s 200,000 plus Twitter followers felt comfortable ribbing the entrepreneur for his perceived failure.

But what happened next is the stuff of Twitter Comeback legend. Anderson swiftly disarmed his opponent in insult-battle, in the following exchange: 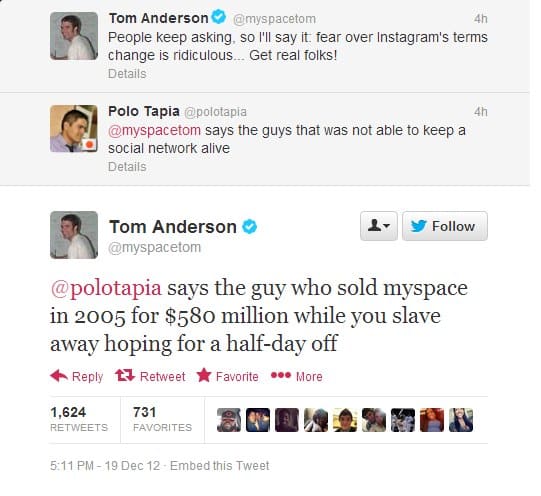 the guy I answered back deleted his account. does that mean I win? #winning #myspacetom

@myspacetom All Your Idiot Heckler Are Belong To Us. Best comeback ever.

As for what he’s currently up to, in May of this year, Anderson announced he would be teaming up with RocketFrog Interactive as an advisor.