We have no idea why it took us this long to shine the spotlight on this twitter account, but at last, here we are. 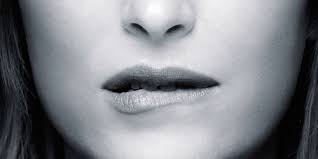 is a parody twitter account that rewrite choice lines or scenes from the notorious E.L James’ “50 Shades of Grey”. It takes the work into unchartered territory, boldly going where no man has gone before, attacking the darkness, and inevitably finding oneself in a secret, exclusive room — The Room of Requirement.

Yes, we are taking “50 Shades” smack-dab into Nerd territory, and that’s where we’re staying. Why? Because it’s glorious.

Oh gods yes, make us ride your long, hard wood. the way you grasp it in your hands. So sleek, so strong, so aerodynamic.

‘So,’ he asked, revealing the erect wood between his legs, ‘Are you ready to play?’
‘Play what?’ she asked, nervously.
‘Quidditch!’ he said.

Because the Dark side always beckons, aways seduces — and they have cookies.

There was something between them – something special, something dark . . .
It was his 1:10 scale limited edition Darth Vader action figure.

She squirmed excitedly as he leaned over and whispered softly in her ear, ‘Asdfg . . hjkl . . uiop.’
She loved it when he talked Qwerty.

*In a deep, husky, bedroom voice* “Have you tried turning it off and on again?”

‘I love listening to a man who can make me feel desperate and humiliated,’ she said, squirming.
‘All right,’ he said, and called IT support.

‘Mmmm, let’s play doctors,’ she whispered seductively.
‘All right,’ he said. ‘You be Doctor Who and I’ll be Doctor Strange.’#DoctorStrange

And the cosmos unravelled at the seams.

LATEST: CERN scientists claim to have finally located the G-spot. Otherwise known as the Oh My God particle.

It’s always the quiet ones.

Despite his innocent asthmatic public image, he was a real snake in the bedroom.
Hufflepuff in the streets, Slytherin in the sheets . . .

50 Shades Of Grey Meets Frozen, Creepy Or Hilarious Or Both? [Video]