Pope Benedict XVI’s @Pontifex account went live on December 3, and as of this writing (December 20) he boasts 1,253,015 followers on a whopping total of nine tweets. Most of those tweets were posted on December 12, with the remaining two posted yesterday (December 19).

I don’t mean to insult His Holiness, but most of his tweets aren’t exactly what I would have expected from one of the world’s top spiritual leaders. Some of these little gems could have easily been tweeted by your college’s Campus Crusade chapter:

How can faith in Jesus be lived in a world without hope?

Any suggestions on how to be more prayerful when we are so busy with the demands of work, families and the world? — Benedict XVI (@Pontifex) December 12, 2012

Problematically, it’s hard to tell how many of Pope Benny’s followers are there for spiritual guidance when so many are clearly there to flame him.

@pontifex the best idea is to drug yourself!!! — BrigadaAntidisturbis (@Vyvyan_Basterd) December 12, 2012

@pontifex devote the effort you do to praying to something tangible. You horrible man.

Still, he has over one million followers in just a few weeks. Most of them have to be believers turning to @Pontifex for daily spiritual guidance the world over, right? 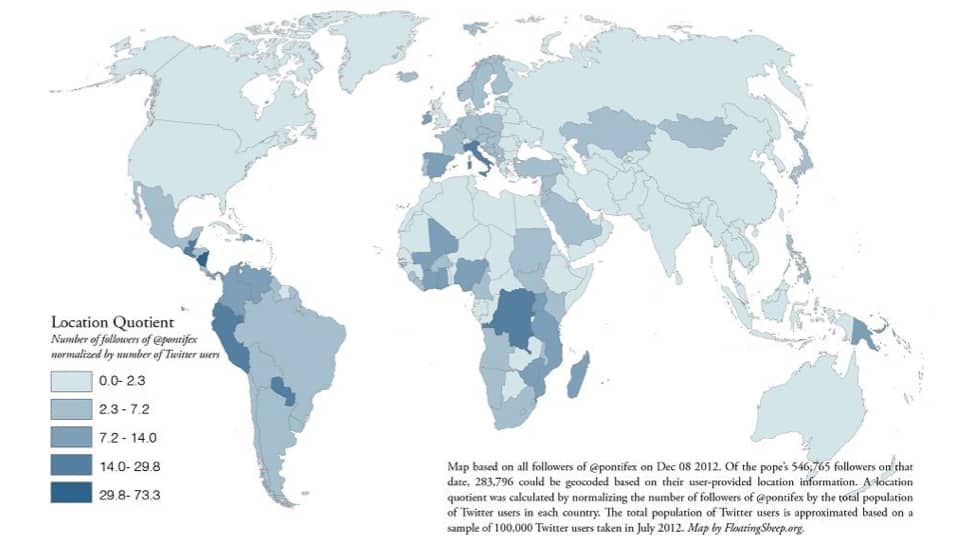 That right there is a map showing where @Pontifex’s followers are concentrated throughout the world. Floating Sheep reports:

Not the best showing. To drive the point home, i09 opines that the map only goes to show that the world is filled with “godless heathens.”

Of course, it only proves what we’ve been saying all along. Love him or hate him, Pope Benedict XVI joining Twitter was a very very bad idea.

Rudely awoken early with stomach cramps, had to drop off the kids, or “give Osama Bin Laden a dignified burial at sea” as it is now known