Confused Fans Think Jay-Z Had An Affair With Rachael Ray

Rachael, or Rachel? To a frenzied mob of enraged fans, it seems there isn’t much difference.

Rumors have begun circulating that Jay-Z has started an affair with Rachael Ray — celebrity chef, creator of the 30-minute meals, and speaker of catchphrases such as”Yum-0!”. That is, that’s what it seems to look like on social media. The fans have swarmed the wrong woman after hearing about Jay-z’s alleged affair with fashion designer, Rachel Roy.

See these tweets for yourself.

Someone’s giving up on the quickest meals of their life.

I can’t believe @rachelray helped Jay-Z do that to the Queen. Never makin’ those 30 minute meals again

She’s so into good food and home life, she must be a good person… right?

.@rachaelray such a good person you’re out here breaking up marriages. Smdh.

So, where exactly did all this confusion stem from?

When Beyonce dropped her newest album “Lemonade”, no less on her husband Jay-Z’s streaming service Tidal,
the Beygency went wild for it. They took to devouring its songs and cryptic lyrics, taking to them with a fine-toothed comb. It didn’t take long until a few choice lines on her single “Sorry” tripped the whole crowd:

He only want me when I’m not on there / He better call Becky with the good hair.

Who is this Becky? And how did she get her hair so good? Fans were dying to know, for their own reasons.

"He better call Becky with the good hair." What did Jay-Z do?!? ? #LEMONADE

TWITTER: FIND BECKY WITH THE GOOD HAIR RIGHT NOW, I NEED HER @

Me trying to google and find out who Becky with the good hair is!!! #LEMONADE pic.twitter.com/y7KoOElDQt

A parody account had even burst out from the woodwork.

@dearwavybee what do you need? Hair tips? A different drink suggestion besides #Lemonade

Meanwhile, Rachael Ray’s cooking and morals are still being called into question, though we sincerely doubt she’ll even notice, what with being busy managing her many businesses, hanging out with her hubby, and whipping up those delicious artichoke burgers with the tarragon sauce. Yum-o!

On the other hand, whatever happened to Rachel Roy? It seems Ms. Roy was savvy to the uproar , as she posted (and later deleted a picture on Instagram with the caption “Good hair don’t care, but we will take good lighting, for selfies. or self truths, always. live in the light #nodramaqueens.” 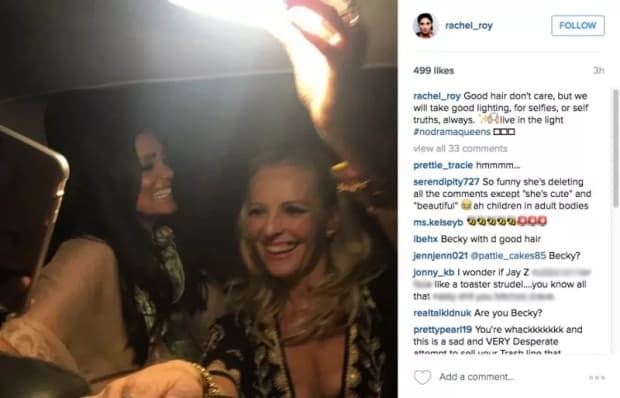 She later tweeted this statement:

I respect love, marriages, families and strength. What shouldn't be tolerated by anyone, no matter what, is bullying, of any kind.

Meanwhile, Queen Bey’s loyal subjects who were glad to watch from the sidelines had this to say about the whole debacle:

BEYONCÉ JUST WON CUSTODY OF THE INTERNET IN THE DIVORCE. #LEMONADE

Beyoncé Has Performance Of Her Career, Silences Divorce Rumors With Tearful Moment [Watch]