Here’s What Happens when Tumblr Folks Come Back From The...

It’s no surprise that Tumblr users, those delicate, rare, nocturnal creatures that subsist on a steady diet of fandoms, art, and pizza, tend to behave oddly when they’ve been indoors for a bit too long. When faced with unfamiliar realities of the outside world, the response systems veer to either abject terror or over-stimulation — or maybe just  a funny mix of the two, with some sincere conviviality throw in.

Here are some fine examples of the Tumblr user out in the wildness of the Real World. It also helps to picture many of the personas in the following posts like this: 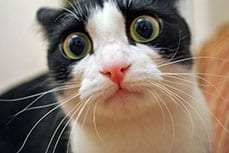 When you relate to inanimate objects a bit too much for other folks.

When your annoyance and mighty need to make everything right again just won’t quit.

Your face when you’re tipped in rare contraband fruits.

When your parents’ sense of humor feels like it came from a sitcom but you just can’t come to grips with it:

Or when your parent discovers Facebook for the very first time, oh gods no:

When your spoonerism makes you trip over your words and say something inappropriate, but it… somehow… actually… is?

When you think a story’s about to end well but there’s something very wrong about something from the very beginning.

When your stream-of-consciousness narration could end up leading to some horrific, unintended horror.

Your face when you forget the very reason for the whole trip.

When you sit through entertainment that’s not quite what you had in mind.

When you’re not sure which one’s more absurd.

When your brain sets out to execute a task but the instructions get muddled up along the way.

Your face — and everyone’s faces — when you keep calm and collected with a sharp object stuck in your arm.

Get Your Monday Chill with These Jokes From Tumblr

Tumblr Gets Deep With Food