According to Columbia University’s National Center on Addiction, teenagers who are allowed to use social media have a higher chance of abusing drugs and alcohol. As if you didn’t already have enough to worry about with parenting a teenager, the exposure of social media seems to be making the task a lot harder. The study concluded that teens who access social media on a regular basis are twice as likely to smoke cigarettes or marijuana and three times more likely to drink.

While these statistics should certainly shock you, it doesn’t mean that you have to pull the plug on ALL of your teen’s social media usage. The study specifically points out that it is related to the TYPE of content your teen accesses. Depending on what your teen is exposed to on a regular basis, it can greatly influence their interest in using drugs and alcohol. Here’s how:

As a teenager, social media is most often used to communicate with friends. Naturally, these are teens from your child’s neighborhood, community groups, and school. The adolescent years are when children are looking to identify with others. They want to essentially “fit in” and be liked by their peers. Though it’s pretty common for teens at this age to want to adapt to their surroundings, if they’re surrounded by the wrong “friends” this could lead to the use of drugs and alcohol and other reckless behavior.

Your child might find it common to see a social media post from friends that talk about popping pills and drinking booze. They’re not taking into account that drinking under the age of 21 is illegal or the fact that “pills” like Xanax actually have an average half-life of 11.2 days (meaning it can stay in their systems that long). Instead, they’re more concerned with how popular their friends look, how interested others are in their posts. The more their friends are able to “impress” them with reckless behavior and antics such as using drugs and partying, the more inclined they are to give it a try themselves. 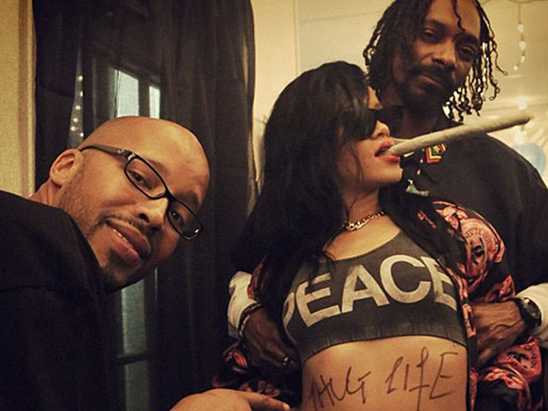 Social media is also a platform that allows you to gain access to the rich and famous. Impressionable teens are looking to celebrities such as actors, sports players, singers, rappers, and the like to learn about the latest trends, how to be cool, and essentially how to live a fun, lavish lifestyle. Celebrities often post pictures and leave messages that aren’t always meant for a young crowd to view.
Seeing their favorite music artist with two Styrofoam cups filled with “drink” or checking out photos where celebrities have been quoted saying they’re “wasted,” “turned-up,” or “lit” can give off the impression that drinking, using drugs, and carrying on in that matter is a fact of life – and is actually fun. They then begin to want to emulate what they see from their idols and thus start partaking in the same activities.

In times past, obtaining drugs or alcohol meant finding a dealer in the area, stealing from your parent’s liquor or medicine cabinet, or scoring some from a friend’s older sibling. However, thanks to modern technology, teens can now get the drugs they’re after over social media. Platforms like Instagram for instance where photos are shared, teens can search for the types of drugs they’re interested in and place an order.

What Can You Do?

Unfortunately, it’s likely impossible to shield your child from all the harsh realities of the world, but there are things you can do to try and minimize their exposure to drugs and alcohol on social media:

1. Have clear rules about what they can and cannot access
2. Monitor their usage with the help of software for tracking their searches
3. Set parental controls to block access to sites or pages with inappropriate information
4. Keep an eye on the types of friends they like and hang out with for suspicious behavior or activity
5. Educate your teen on the severities of drug and alcohol use and the affects it could have on their body.

You may have thought that platforms like Facebook, YouTube, and Instagram were nothing more than a digital hangout for your teens. The truth is, however, the Internet and social media can expose your teens to things that they don’t fully comprehend – such as the excessive use of drugs and alcohol. While you can’t get rid of social media altogether, you can do things to protect your teen going forward to ensure they’re safe. If you suspect your teen is already abusing drugs or alcohol, getting help should of course be your first course of action.

Instagram ‘The Most Utilized’ Social Network For Selling Drugs [Infographic]