I Choose You! US Presidential Candidates Drawn As Pokemon

Because sometimes, thinking of your presidential candidates as Pokemon can make it all a little easier. 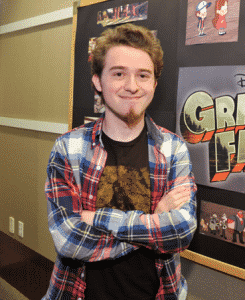 Meet Alex Hirsch. Alex is not only the creator of the comedy thriller animated series Gravity Falls. He’s also a story-boarder, voice actor, and an all-around awesome guy. When he’s not cooking up new episodes or creating number codes to crack at the end of every episode, he’s also keeping abreast of the US presidential election climate.

And oh yeah, he’s happened to Pokemon-ify the current presidential hopefuls with the hashtag #PresidentialPokemon. The matches have never been more apt, nor cuter.

The first Pokemon on the list is “Schmuck”, in honor of Mr. Donald Trump.

Oh, and look, it even has stats.

And then there’s “Burnie”, and he’ll make you #FeelTheBern.

This “Lil’ Marco”, for Marco Rubio, has a special ability to “dig itself into a hole”.

The “HillarFree”, for Hillary Clinton, can Dodge and Cackle an opponent to fainting, but is rendered powerless when faced with Email.

Not even Jigglypuff’s Sleepy Song is any match to the ever-slumbering Ben “Carzzzon”.

One fan took up the challenge, and made her own version of Ted Cruz. Behold, the HypnoCruz!

Alex stepped in and gave the Pokemon it’s own stats and powers.

Alex’s fans and followers went wild. They chimed in with their own quips about these Presidential Pokemon’s fighting strategies:

@_AlexHirsch I can’t think of a better one. #Hillary speeches have the same affect as ‘Sleep Powder’ attack. #PresidentialPokemon

It seems a daily diet of bibles is what keeps the Carzzzon happy.

Someone felt the need to point out what a Muk really is.

‘Trump is Muk because Muk is “the only Pokémon that’s literally a pile of talking garbage.”’ #PresidentialPokemon pic.twitter.com/KwnXsJSOae“

And one hoped for a badass evolved form for the Burnie.

Some fans made our dreams come true and turned these fine illustrations into card designs straight out of the trading card game.

WHAAAAAT!! Look at this amazing Pokemon Card version of my #PresidentialPokemon “Burnie” by @Ruckusleaf!! pic.twitter.com/xxm8T2rh1G

The next big question on everyone’s mind is: Which one will evolve into President?

You may also enjoy:
Ben Carson Releases Rap Song to Woo Young Black Voters
The Polls Are Turning Into Mayhem And The Internet Isn’t Happy
Tinder Wants to Match You With the President of Your Dreams