Facebook is a terrific place to bring people together — friends, lovers, parents and children, colleagues… oh, and suspects and the police.

Sometimes, when the police put up a Wanted ad with the suspect’s photo on it, it just reads as less of a warning and more of a… really big temptation. At least, that’s what Roderick Hill might have been thinking when the Linden police Department posted this on Facebook.

Hill, according to the post, is wanted for the charge of Attempting to Elude, and anyone spotted or proven to be giving him a helping hand will be in turn charged with Hindering Prosecution.

Other suspects would have probably ducked and taken a digital break (at lest from Facebook) in a situation like this, but Hill? Hill was just too much of a baler to let this ruffle his swag, and did the best thing he could think of: he trolls the police.

Brazen? Definitely. Foolhardy? you bet. Someone out to simply have a good time at the expense of Linden’s Finest? Certainly smells like it. Whaever Hill’s reasons, other commenters went nuts over this, and posted their own reactions. 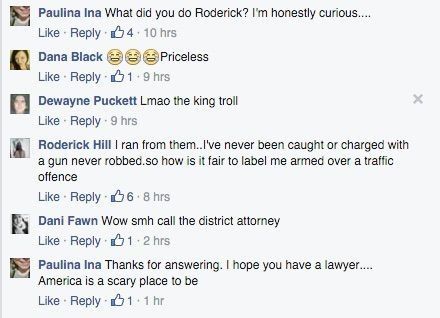 Others soon started questioning the way the police’s post had tagged Hill as “considered armed”, despite Hill having never been charged with a gun offense. Were they hinting that there was more going on behind the wording than this post was willing to let on? 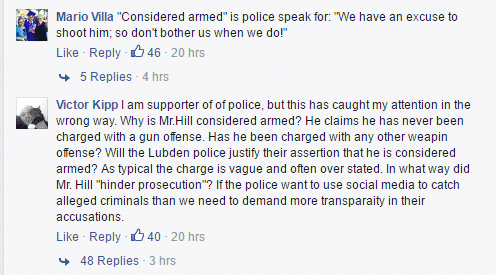 Whatever it really was, there is still no update on whether Hill has been apprehended. However, this one comment clearly sums up everything in such choice words: