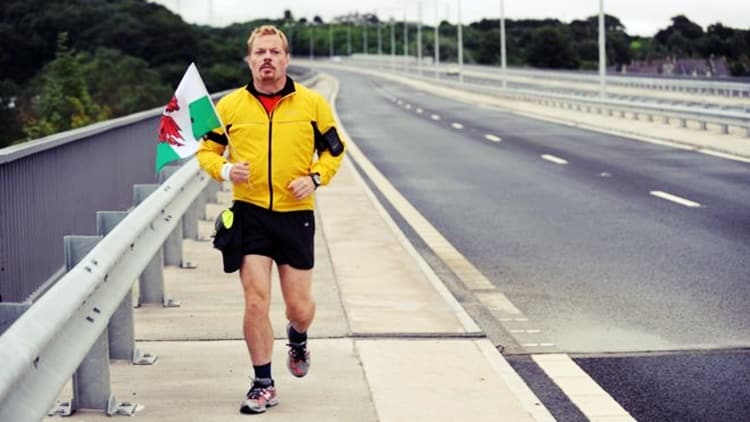 Eddie Izzard is one brave soul who doesn’t compromise. Izzard, a British stand-up comedian, has been one to wear women’s clothing openly and discuss this in his shows, long before life outside the gender binary became a thing. He also speaks his mind about politics, and certainly puts his money where his mouth is. He is one of the biggest contributors to the UK’s Labor Party, and he recently announced his intention to stand their National Executive Committee February of 2016.

It was his feet that did most of the talking, though, as he successfully ran 27 marathons in 27 days. This, dear readers, is certainly no mean feat.

In June 2009, Izzard began running marathons to raise money for the charity Sports Relief, a non-profit which raises funds from marathons and other sporting events to bring much-needed education, medical care and mental health care to the world’s poorest communities.

in 2009, he ran 43 marathons in 51 days — but Eddie Izzard wanted to do more. This year, BBC announced that Izzard would run 27 marathons in just 27 days throughout South Africa for Sports Relief. And he did it.

All the stress of running those 27 marathons within such a tight schedule finally came out in his emotions. You see him break down a bit at the end of the video. We want to hug Eddie Izzard so hard now.

27 marathons in 27 days by the astonishing Eddie Izzard.
The #MarathonMan pic.twitter.com/xcgCXrFzpI

So, why the number 27? Turns out that Izzard chose this number in honor of the 27 years Nelson Mandela spent in prison. He says in an interview:

I was inspired to run 27 marathons in 27 days for Sport Relief after seeing the film Invictus. The film featured a poem called Invictus – one of Nelson Mandela’s favourite poems during his 27 years in prison. He used it to give himself determination to keep himself going and keep his spirit alive. It’s a beautiful poem about being the master of your own fate and destiny. Watching the film I suddenly realised – I have to run in South Africa. I should run 27 marathons in 27 days as a salute to the great man. It is also a salute to all who struggled and fought against Apartheid. So I am delighted to be doing this for Sport Relief. But of course – 27 marathons in 27 days is nothing compared to what Nelson Mandela did by serving 27 years in prison. He was a great soul and leaves a fantastic legacy for the world… I tried to do this four years ago and failed. This time I will succeed. But if I fail, I will come back again and again and again until I do succeed. Because that’s what Nelson Mandela would have done.

By Watching This Video Of Puppies, You’re Donating Money To Charity