Shelter Dogs Serve as “Ball Boys” at Tennis Open to...

Do you love tennis? How about dogs? If you can’t get enough of both of them, you’ll love what went down in Brazil’s most recent tennis open.

Tennis athletes  Roberto Carballes Baena of Spain and Gastao Elias of Portugal shared the limelight of the game in Sao Paolo last week  with four surprise guests who stole the show. Frida, Costela, Mel and Isabelle are four shelter dogs who leapt, ran, and sprung into action, retrieving balls and returning them to their grateful humans. Indeed, in this case, four feet can be better than two. 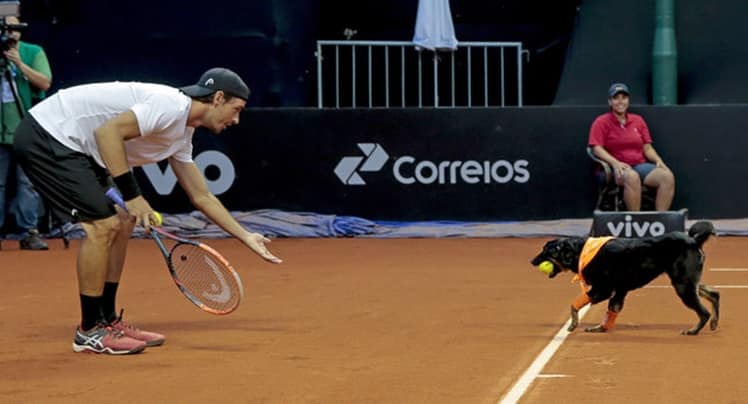 Frida, Costela, Mel and Isabelle used to run the streets of Sao Paolo, picking at garbage bins for survival. Now, they are glad to be of service to the sport. They’d been trained for months as ball boys and shine at what they do. Sometimes, the players even intentionally overlooked some of the balls so the audiences could clap and cheer the dogs on as they worked.

This quartet of canines is not only tasked to serve on the court — this job is also one way to boost awareness of animal adoption in Brazil.

“The idea is to show people that a well-fed and well-treated animal can be very happy. We have more than 1,000 dogs in our care,” says Marli Scaramella, the organizer of the initiative in Brazil.  At present, the four four-legged stars of the tennis court reside in a shelter home, and are still waiing for a family to take them to their Forever Home.

2015 has seen a boost in shelter pet adoptions, thanks to the many witty and charming ad campaigns in Brazil. From sharing the love on Valentine’s Day, to creating witty new names for pooches, the adoption trend is going strong. Let’s hope we soon see emptier shelters and more happy Forever Homes this 2016.

Abandoned Blind Pitbull Is Given Second Chance At Life