‘How To Move To Canada’ Search Spikes on Google in...

Oh, Google. You’ve lately been turning into something of a social thermometer, and we don’t blame you. I mean, can we really ever fault you if Americans are starting to feel nervous about the political climate, and turning to you for possible answers?

Right now, the United States of America is day-in day-out bombarded with hateful rhetoric, xenophobic sentiment, and an alarming (and quite frankly, embarrassing) amount of empathy from one of the most controversial presidential candidates in American History. You know what’s scarier? It’s that this candidate is still gaining support and followers. Friends, it’s highly possible we’ll be looking at an America, one nation, under Donald Trump.

And that’s why one of Google’s top searches in these past few days is “How To Move To Canada”. Not kidding.

After Trump’s Super Tuesday victory, Google saw a spike in the search “how to move to Canada” merely hours after the mogul won the primaries in seven states. Looks like a host of Americans are so scared, they’re just about ready to get packing. 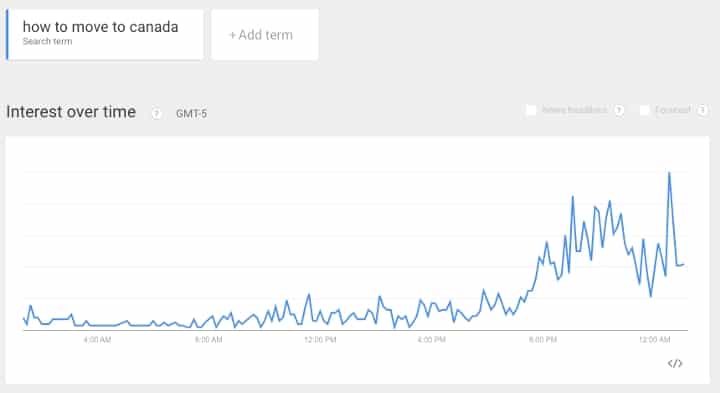 And Americans are not going to be left out in the cold, it seems. The Mayor of Toronto got wind of the whole search situation, and did the decent thing to do: tweet a link to the immigration application form.

To all my American followers tweeting at me tonight, here’s the link: https://t.co/0epl8Z5zlQ pic.twitter.com/mMfeIc1Ayg

And of course he just dropped subtle reminded about one of the many things that make Canada so awesome.

(We got free healthcare too)

Um, some of us are starting to kinda want to get over there before that wall’s done.