by Duncan Riley 11 years ago3 months ago

The Twitter user with the fake Twitter profile @coventryfirst first posted on May 27, and Tweets among other things that “the faster people die the more coventry first profits!” and “plane crashes r bad 4 the passengers and airline corp but those crashes also increase shareholder value in the death industry. coventryfirst.”

According to Reuters, Coventry First is accusing the anonymous Twitter user “of unfair competition and trademark infringement” and that the “numerous ‘tweets’ about the life settlement industry is likely to cause confusion in the marketplace.” The company is also seeking “a court order for monetary damages and the destruction of the Twitter page.” 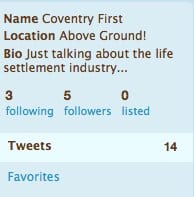 It may sound like stock standard corporate bullying of a critic, but here’s where the case borders on the absurd: at the time of writing the Twitter account has made only 14 tweets, and has a grand total of five followers.

To make that clear: a multimillion dollar insurance company is publicly suing the person behind a fake Twitter account that has five followers and thus far been likely read by less people than I have fingers on my hand.

Coventry First is about to discover the Streisand Effect.

Putting aside the stupidity of spending big money on suing someone who has no followers and the cost of negative PR for Coventry First that will flow from the decision to sue, the company could have simply asked Twitter to shut the account down. Fake accounts are allowed under Twitter rules, but it must be disclosed that they are fake. The @coventryfirst account doesn’t state that it’s a fake account in the bio/ name for the account, and this is the criteria Twitter has used in the past when taking action on fake accounts.