An Outpouring Of Twitter Tributes to Harper Lee On Her...

Critically-acclaimed writer Harper Lee, immortalized by her novels “To Kill a Mockingbird” and the recent “Go Set a Watchman”, passed away in her sleep peacefully at the age of 89. Her death was confirmed early morning Friday by the City Hall in Monroeville, Alabama, where she lived. She was the only author to win a Pulitzer prize for her very first novel, “To Kill a Mockingbird”.

“Her passing was unexpected,” Lee’s family said in a statement. “She remained in good basic health until her passing. The family is in mourning and there will be a private funeral service in the upcoming days, as she had requested.”

“This is a sad day for our family,” Her nephew, Hank corner, added. “America and the world knew Harper Lee as one of the last century’s most beloved authors. We knew her as Nelle Harper Lee, a loving member of our family, a devoted friend to the many good people who touched her life, and a generous soul in our community and our state. We will miss her dearly.”

Twitter users also sent Ms. Lee off with their love and prayers through a bevvy of tweets.

A single book touches so many lives. A beautiful legacy. Harper Lee, author of To Kill a Mockingbird, dies aged 89 https://t.co/pEHyKhQ6Qe

I’m heartbroken to hear that Harper Lee has passed away. To Kill a Mockingbird is one of the books that made me want to study literature.

Lee, who suffered a stroke in 2007, was a very private person who was rarely interviewed.

Her one book of fiction changed a generation. RIP Harper Lee. https://t.co/s0i93o5wiR

People also tweeted their favorite quotes of her timeless novels.

“Real courage is when you know you’re licked before you begin, but you begin anyway and see it through no matter what.” #HarperLee

“Atticus, he was real nice.”

“Most people are, Scout, when you finally see them.”

“People in their right minds never take pride in their talents.” from To Kill A Mockingbird #RIP #HarperLee

“The book to read is not the one that thinks for you but the one which makes you think.” -Harper Lee

Tim Cook, Matthew Modine, and many other personalities also took to Twitter to pay their respects.

Rest in peace, Harper Lee. “The one thing that doesn’t abide by majority rule is a person’s conscience.”

Bless you #HarperLee Thank you for the chance to get inside the skin of Atticus. You made us all more conscious. pic.twitter.com/lWNKqdREcI

I re-read #tokillamockingbird during my trial. Touched me much more than when I first read it in high school. Rest in peace Harper Lee

One of the great writers of all time, Harper Lee laid bare the soul of America and her work will continue to educate for generations.

Requesciat In Pace, Harper Lee. You have made many of us redefine justice, and stoked the flame in us to fight for what is right. We shall never forget your legacy. 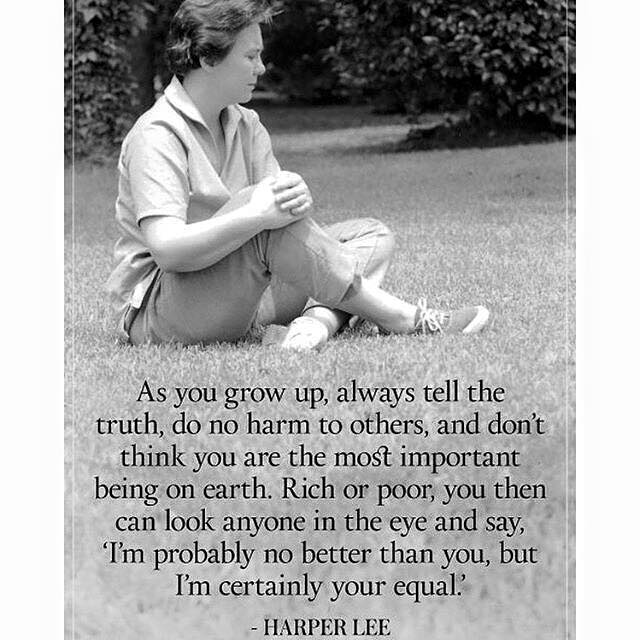