Many schools in the United States are still in a bind regarding LGBT couples during their prom. That’s why a number of LGBT-equality non-profits, such as Minus18 in Australia, is working towards setting up formals for LGBT teens to make good memories.

However, STOP SAFE Schools Coalition, an anti-gay group, herd news of what they called this “heathen” prom. They endeavored to pull off a gesture so grand it’d stop the formal from becoming a reality. Little did they actually know that this very same move would end up becoming one of the biggest ways they’d end up supporting Minus18’s cause.

STOP SAFE Schools Coalition ended up raising thousands of dollars and sending them Minus18’s way. How? By buying out all the tickets to the formal, that’s how. 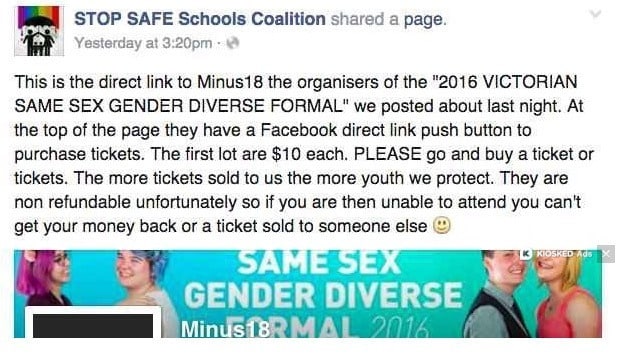 Their original goal was to buy out all the tickets and just not show up, making it impossible for real LGBT teens to attend. The tickets after all (as was written on their Facebook page which has since then been taken down) were non-transferable. However, All that money sent Minus18’s way simply allowed them to switch to a bigger venue.

What’s more, the STOP SAFE purchases ended up raising so much money for Minus18, this allowed the pro-LGBT non-profit to pledge those same tickets to LGBT youth on the waitlist. It actually allowed them to subsidize thousands of gender-diverse teens who may not have been able to afford the formal’s entrance fee in the first place.

So, exactly how far up have the funds for the formal gone? Initially, the group had aimed for $15,000, but they have now raised over $45,000 on their crowdfunding page. How’s that for fierce?