“A Streetcat Named Bob” To Hit US Cinemas This Year

Remember Bob the streetcat? About a year ago, we covered how this adorably chubby orange tabby saved James Bowen from his heroin addiction, taught him to get his life back together and even helped him write a book that quickly became a bestseller the world over.

The story of Bob and his human James are about the grace the silver screen in the US, well within this year, and fans and friends of the odd, busking twosome could never be happier nor more excited. Filming started well into September of 2015; British actor Luke Treadaway is set to play Bowen. A herd of “Bobalikes” have been specially trained in Vancouver, Canada to portray the adorable tabby set to capture hearts in cinemas everywhere. 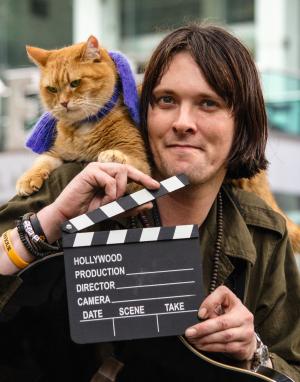 “Each of them can apparently do Bob’s now-famous high five,” Bowen writes for The Big Issue. “Each of them will have to perform stunts such as the moment when Bob jumped on a bus to sit alongside me. I can’t wait to see that particular scene.”

Through this movie, Bowen hopes to not only touch the hearts of viewers through sharing their unique story, but also to give back as a way of paying the goodness forward. Part of the proceeds from the movie sales will go to charities close to his heart, such as The Big Issue Foundation and Blue Cross. He also aims to open a cafe of his own one day to run helpful courses on the proper care of cats and animal welfare in general. Bowen works hard to send perks such as books, mugs,and shirts to donors, and even wheels out to deliver the goodies himself.

With all the plans and hard work coming to fruition, James Bowen still deeply understands there is still so much work to be done. However, this does not deter him to keep pushing giving it his 100%, for the love of giving back. “I am determined to give it my best shot, however. Regardless of what hurdles lie ahead and whether I can bring my plans to fruition, running the project has given me a purpose and a direction in life that I could never have dreamed of five years ago,” he shares. “I’m determined that the charities I care about most will benefit from it in one way or another.”

Images courtesy of BBC and The Big Issue