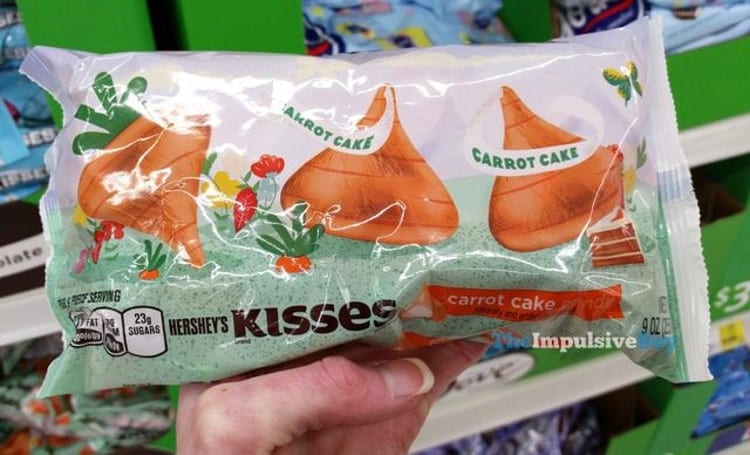 Easter is a pretty epic season in the candy industry, and the biggest sweet companies do take this happy holiday very, very seriously. There’s marshmallow Peeps, and the Cadbury Creme Eggs, not to mention the moulded chocolate bunnies, and so much more to mention.

I think it;s pretty safe to say that Hershey’s has upped the Easter candy game by rolling the first ever carrot-cake-flavored chocolate kiss. In fact, it’s quite possible you might find a pillow pack at your local Walmart exclusively and very soon, as shoppers all over the interwebs have spotted and snapped the curious candy on the shelves. It’s just in time for Spring, too.

Thinking that this just might be some orange-colored chocolate? Not quite — according to The Food Beast, this brand-new Kisses flavor is “made with a white-chocolate base [and] the Kisses are giving a bright orange flavor with some carrot flavoring.”

While this treat may be bunny-approved, the Internet certainly has mixed feelings about this. Some love it for its looks:

Some love it for the taste:

Some are on the fence about it:

And some just downright hate the concept:

How about you readers: can’t wait to try this new flavor, or are you pretty sure you’ll pass up on this one? We want to know what you think. Tweet us your responses @SocialNewsDaily!

The US Presidential elections are just days away and Americans all over the world are bracing themselves for the outcome. Celebrities are using their social media influence to encourage every registered voter to exercise their rights and to vote wisely. A multitude of tactics have been used by celebrities for years and, each time, the… END_OF_DOCUMENT_TOKEN_TO_BE_REPLACED

Election day is coming this November and everyone is preparing to cast their votes when the day is here. You may have voted numerous times and have smooth voting transactions every time. However, we will never know when an unwanted scenario suddenly happens. Doing a little research to learn how to handle unexpected mishaps may… END_OF_DOCUMENT_TOKEN_TO_BE_REPLACED

The tensions are high for the 59th quadrennial US Presidential elections. Americans all over the world are glued to their screens to track the polls. Just like in every other election, every vote matters. It is every American’s right to contribute to the selection of a President. You may think that you can only cast… END_OF_DOCUMENT_TOKEN_TO_BE_REPLACED