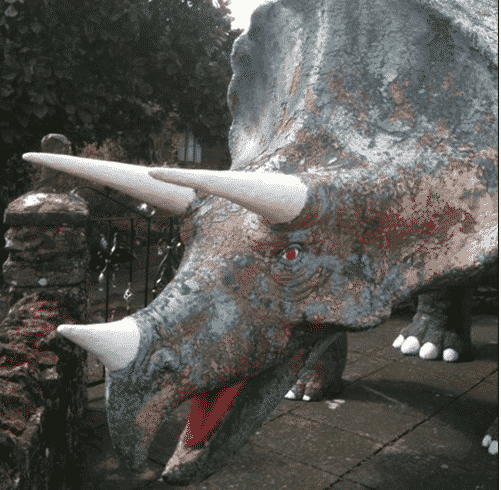 Dogs or cats roaming the streets might be somewhat of a normal sight in any neighborhood. But, a dinosaur blocking the road might gather a bit of attention. That’s exactly what happened in England’s Isle of Wight.

“Godshilla” was found blocking a local road in Godshill (hence the name), but disaster was averted when people discovered it was a replica of a triceratops.

Upon investigation, local authorities discovered that the dinosaur statue was placed there by some mischievous pranksters. “Godshilla” is no stranger to being the center of a prank. Past shenanigans include the troublemakers tying balloons around the dinosaur’s neck and decorating it with tinsel for Christmas.

Of course, the crazy prehistoric sighting started a trend on Twitter. Seriously, Twitter went crazy over this “Godshilla” sighting.

Now, “Godshilla” belongs to a local man who says this statue isn’t lightweight, so it took a lot of effort to get it into the road.

“It must have taken five hefty lads to move it,” he said. “It’s great people are talking about it, but I wouldn’t want to encourage anybody to cause a hazard for traffic.”

Nicolas Cage to Give Stolen Dinosaur Skull Back to Mongolia