It’s 2016. Is browsing your mobile phone at a party really all that rude?

It used to be rude to ignore a phone call. Now it seems the tables have turned—answering a call or sending a text is considered rude in certain company. But that recent piece of social etiquette already seems to be changing in a world where everybody has a mobile phone and most people have cellular internet.

Playing with your smartphone is what reading the newspaper was a decade ago. Can it really be considered rude anymore?

I asked an online focus group to help me sort it out, posing the question “Is it rude to be on your phone while at a party, get-together, or other social event? Why or why not?”

“F*ck no, because f*ck everyone else,” writes Brendan, a musician from Houston. “These cats won’t collect themselves, not to mention the fact that I can’t go 20 minutes without shit posting.”

Conversely, Josh, a writer, filmmaker and goat farmer from Texas, says being distracted by your mobile device can make others feel like you’re not interested in them.

“I guess because I’m a littler older but I find it rude,” he writes.

“I know the younger crowd will probably say something like it’s acceptable now and you’re probably right, but it feels like the people around are boring so you need to see what nonsense [your friend] is posting.”

Quiana, a political writer, seems to agree: “[It’s] a bit rude unless you’re showing them something on your phone.”

Browsing as an escape from social anxiety.

Two of the respondents suggested browsing their phone is a good way to cope with social anxiety. This has been written about to the point of tedium, but the pieces tend to skew the matter in a decidedly anti-technology direction. It’s assumed mobile phones cause people to behave anxiously in social situations, using flimsy logic that amounts to little more than “kids these days, am I right?”

Dishearteningly, even The Atlantic ran with this angle in a piece by Alexander Ossola.

Examine the evidence, however, and you’ll find journalists are in need of that hallowed statistical razor: correlation does not imply causation. The socially anxious are more likely to escape through technology—mobile phones and social media don’t somehow poison the mind and undo millions of years of biological and social evolution.

“Being at social gatherings is fun but if my anxiety gets too high or I reach my limit on social interaction for a little bit with no ability to leave staying behind my phone can help me to relax and calm down.” — Erin

“I don’t care if it’s rude or not,” writes Keith. “I have social anxiety when I don’t know many people. So I’ll look at my phone, or drink heavily. Sometimes both, but one is healthier than others.”

More opinions from the focus group.

“It depends on the circumstance and the length of time. If you excuse yourself for a quick moment, it isn’t. So long as you don’t stay on the phone gabbing, it’s okay.” — Romaka 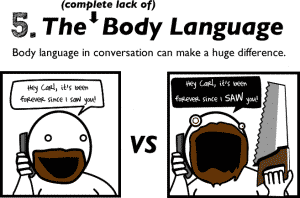 “It certainly can be if you do it in a way that indicates you’re completely withholding attention from the people you’re with, but it’s also become rude to expect people to fully avoid their phones – physical collocation no longer implies that you have a monopoly on people’s attention.” — Skyler

“I think as we’ve culturally become more dependent on these devices for our day-to-day lives, it’s probably acceptable to be on your phone in a social gathering. Some people have social anxieties and retreat as a mechanism to keep them comfortable, a lot of what people share with each other is online, and even though there are some people who are on their phones or other devices to an extreme capacity, more often than not being on their phone doesn’t obstruct them from socializing.” — Robert

“I think it depends on who is holding the party. If you’re going to someone from an older age demographic, yes, they will consider it rude. If you go to someone in the millennial age group, perhaps not.” — Holly

Samsung Galaxy Phones May Be Vulnerable to Security Flaw

‘Catman’ Gets A Ticket To The Super Bowl, Thanks To Social Media