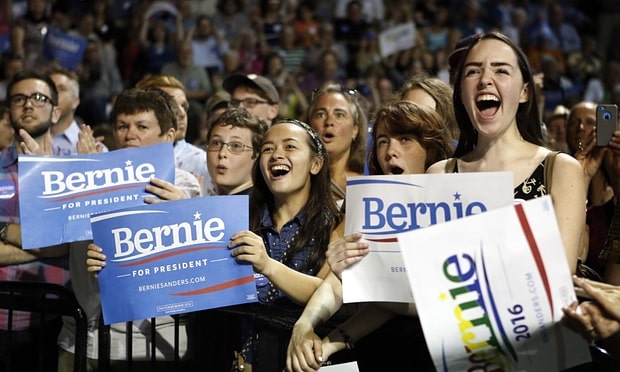 Vermont Senator Bernie Sanders is the surprise hit of the political season. His near tie with former Secretary of State Hillary Clinton at the Iowa caucus has invigorated his supporters, who seem determined to make a final push to get the word out before the New Hampshire primary.

For Sanders, New Hampshire will be make-or-break. He’ll need to trounce Clinton to have any shot at winning the Democratic National Convention later this year. Perhaps that’s why desperate #Berniebots have been flooding Tinder with pro-Sanders propaganda. No, really—check it out:

It’s hard to be mad at Sanders’ supporters who, like the candidate they back, see themselves as ordinary Americans just trying to raise everybody’s standard of living. Not everyone, however, is thrilled about their new medium of proselytization.

A hilarious report from Reuters details how Tinder banned two women, Robyn Gedrich, 23, and Haley Lent, 22, after they spammed inboxes with pro-Bernie messages.

Robyn Gedrich, 23, said she sent messages to 60 people a day for the past two weeks trying to convince them to support the U.S. senator from Vermont in his race for the Democratic nomination against former Secretary of State Hillary Clinton. ‘Do you feel the bern?’ her message to other Tinder users read, parroting a Sanders campaign slogan. ‘Please text WORK to 82623 for me. Thanks.’

Haley Lent, 22, a photographer from Cedar Rapids, Iowa, told Reuters in a Twitter message that she also got locked out of the app on Thursday night after sending messages trying to convince people to vote for Sanders the previous night. Lent, who is married, said she talked to 50 to 100 people on the app. She had even bought a Tinder premium membership, which allows users to change their location, for a month so that she could reach people in New Hampshire and promote Sanders.

I guess that’s one way to feel the Bern.

Bernie Sanders Gets HUGE Surge In Poll Numbers Before Election