Barbie is now a lesbian. Well, kind of. Mattel unveiled a new design in honor of famous soccer player, Abby Wambach. Wambach made headlines recently after deciding to retire after 15 years on the United States women’s national soccer team.

Mattel explained that the doll is part of series meant to celebrate women in business. Wambach has definitely been successful in her business. As one of the most noted female sports stars in the United States, Wambach has won the Women’s World Cup, two gold medals at the Olympics and U.S. Soccer Athlete of the Year six times! 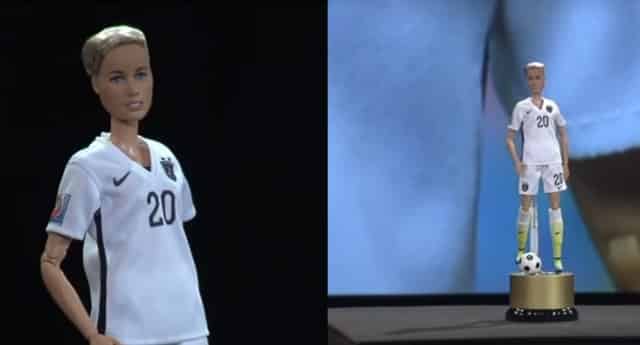 Of course, conservative critics immediately went on the defense of the Wambach barbie doll unveiling, complaining about Wambach’s sexuality. Yes, Abby Wambach is a lesbian. She is very open about her sexuality and married the love of her life in 2013. Perhaps, critics are worried that the doll will teach children that all love is created equal. Is that a bad thing? It is highly doubtful that this doll will represent anything profound about the gay community. As Mattel says, the doll is meant to represent inspiration.

“We believe play is important… and that’s for a very good reason.Play is a way that a girl goes on her own personal journey of self-discovery. That’s a journey sparked by inspiration – and that’s our job as the current leaders.Play is the way they learn to push the boundaries of possibility, and discover their own limitless potential.
Makers and Barbie are really thrilled to honor a woman who’s redefined what’s possible through her own effort, her bravery, and her accomplishment.”

Wambach did appreciate that the doll stayed true to her personal appearnace. She admitted that she played with Barbies as a young girl and she found it disheartening to not be able to find a doll that looked like her.

“I know about playing with Barbies who may or may not have looked like I felt – and I feel like this is a really impactful statement,” Wambach explains. “It just proves we really are getting somewhere.”