You’ve Seen This Image, But Do You Know The Backstory?

It’s 1992. Singles from Nirvana’s Nevermind are all over the radio. In January, President George H.W. Bush fell violently ill and vomited into the Japanese Prime Minister’s lap. You’re hungry, so you stop by a pizza joint and meet the owner; a 62 year-old immigrant from Vietnam. He’s unassuming but friendly. You go to the restroom, and scrawled on the wall are the words “We know who you are, f*cker.”

And who was that f*cker? A former South Vietnamese General, and the villain of the anti-war movement’s most widely circulated photograph. General Nguyen Loan is the executioner in the iconic photo of a Viet Cong prisoner’s last millisecond of life. 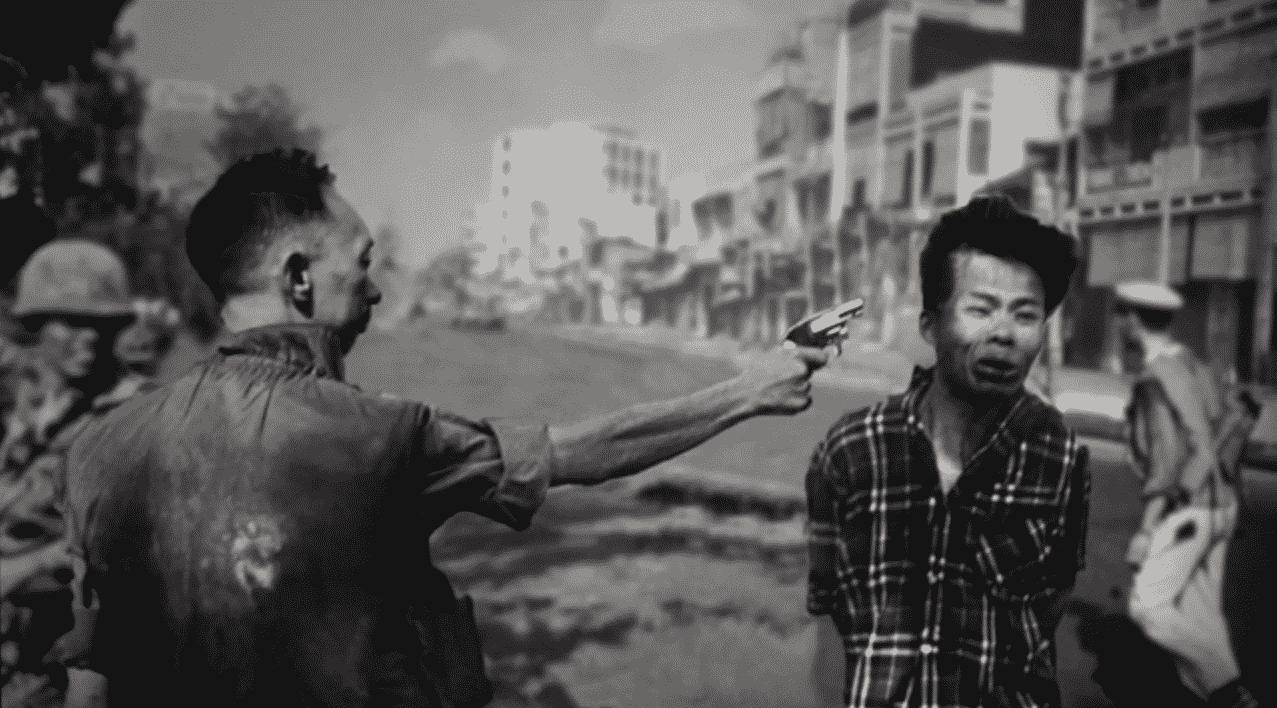 Without the context behind the infamous moment, and with its proliferation as an anti-war photograph, it’s easy to assume Loan was committing a war crime, perhaps even executing a civilian. The truth of the matter may call our sense of morals into question–or may not–but it certainly demonstrates the cold brutality of that doomed conflict.

The man Loan was executing was actually an infamous Viet Cong assassin, and leader of a death squad that targeted Saigon’s police officers and their families. His name was Nguyen Van Lem, but he was known as Captain Bay Lop. At the time of his capture, Lem was in the process of burying the bound and shot bodies of 34 men, women, and children.

Lem was believed to be responsible for the brutal murder of one of Loan’s own officers, along with the officer’s family. It was all part of a Viet Cong offensive that included beheading noncombatant women and children in war-torn Saigon.

Pulitzer-winner photographer Eddie Adams told his former boss about the moment he snapped the infamous photo:

“I just followed the three of them as they walked towards us, making an occasional picture. When they were close – maybe five feet away – the soldiers stopped and backed away. I saw a man walk into my camera viewfinder from the left. He took a pistol out of his holster and raised it. I had no idea he would shoot. It was common to hold a pistol to the head of prisoners during questioning. So I prepared to make that picture – the threat, the interrogation. But it didn’t happen. The man just pulled a pistol out of his holster, raised it to the VC’s head and shot him in the temple. I made a picture at the same time.”

After the execution, General Loan told Adams: “They killed many of my people, and yours, too.” Another source has him saying: “These guys kill a lot of our people, and I think Buddha will forgive me.”

Were General Loan’s actions warranted, or even legal? The question has never been answered by a formal court, though the case raises obvious objections regarding the Geneva Convention’s articles on the treatment of war prisoners.

Adams himself regretted ever taking the photograph, going as far as to say he “killed” General Loan:

“Two people died in that photograph: the recipient of the bullet and General Nguyen Ngoc Loan. The general killed the Viet Cong; I killed the general with my camera. Still photographs are the most powerful weapons in the world. People believe them; but photographs do lie, even without manipulation. They are only half-truths. … What the photograph didn’t say was, ‘What would you do if you were the general at that time and place on that hot day, and you caught the so-called bad guy after he blew away one, two or three American people?’…. This picture really messed up his life. He never blamed me. He told me if I hadn’t taken the picture, someone else would have, but I’ve felt bad for him and his family for a long time. … I sent flowers when I heard that he had died and wrote, ‘I’m sorry. There are tears in my eyes.'”

How moral was Loan’s wartime behavior? It depends on one’s own definition of morality. In hindsight, it would be hard to argue the Vietnam conflict was a moral war, but then again—how moral can armed conflict be?

People in every department of the business of war make decisions, from the boots on the ground to the smiling politicians at home. They face impossible moral dilemmas before breakfast. A hardened Vietnam general like Loan either loses his humanity or sacrifices the part of himself that still believes in binary concepts of right and wrong.

For the record, the author wishes to advocate against the execution of anyone, let alone execution without trial.