Fresno Man Found Murdered After Posting This Suspicious Video To...

by Meagan Freeman 7 years ago10 months ago

John Lang was known as a sort of activist in the city of Fresno, California. Active on community news sites and social media outlets, Lang has a history of causing a fuss for the city. Some may of called him a troublemaker or paranoid, but he was known to post videos of his several encounters with police and other city officials. On January 16, Lang posted his last video. Using the name Lang Marine, he uploaded a surveillance video of a carpet cleaning van. It showed a man acting suspiciously, looking around and walking up to his gate and returning to the van. It may seem like nothing to the naked eye, but it’s Lang’s message that got people talking.

“If I turn up missing or dead tomorrow remember this Van. I think I seen a couple of guys sneak out the side door and into the building when it was parked in the carport this afternoon. I’ve been causing the City of Fresno a lot of problems recently which I now regret..”

Then, the story took a tragic twist. Lang was found dead inside his burning home just days later. 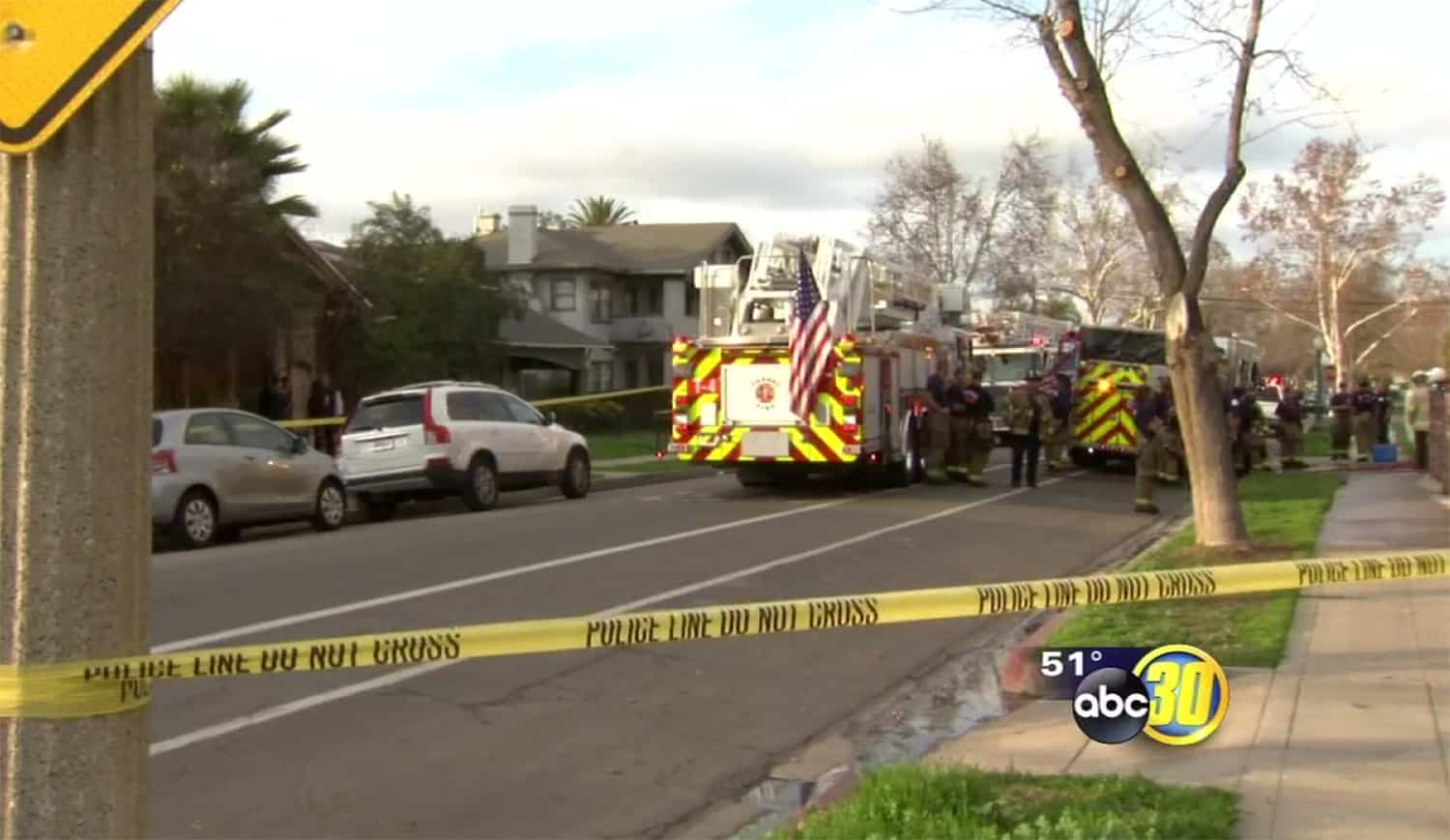 Although, he was injured from the fire. He also suffered several stab wounds. The medical examiner could not tell if he was killed by smoke inhalation or the stab wounds until further tests were done. ABC30 reported on the unfortunate event:

“Police say a man who had been stabbed was found inside a burning Central Fresno home. He was pronounced dead at the hospital and the neighborhood is in shock. The smoke was spotted by neighbors on Van Ness, just north of Belmont around 3:00 in the afternoon on Wednesday and firefighters just happened to be a few doors down on an unrelated call. Battalion Chief Todd Tuggle said, “While the 911 call was going in, neighbors were flagging down our engine company.” The home was heavily secured with a gate so firefighters had to force their way in. After a quick search, they found a man in the kitchen, unconscious and bleeding from several stab wounds. He was taken to the hospital and pronounced dead. Lt. Joe Gomez with the Fresno Police Department said, “Unknown if the stab wounds caused the death or the smoke inhalation, it’s too early to tell.” Investigators call the death suspicious and they believe the house was intentionally set on fire. Tamara Olivarria who lives across the street said, “He just got those lights fixed and the gate is locked so I’m not sure how anyone would have got in even, but it’s kind of scary.” Police haven’t confirmed it but neighbors say the victim is a man in his mid-40’s– a man who lived alone and worked on boats at the home. Theresa Fuentes says he was a friend and she’s not sure why anyone would want to hurt him. “If it’s a random thing, that makes it much scarier…cause the neighborhood is getting better, we thought,” Fuentes said. Olivarria added, “It’s sad, you know, I hope he didn’t experience a lot of pain.” At this point, there are no suspects and police need help solving the case.”

So, was Lang on to something? Was he trying to warn everyone that there was a group of corrupt police officers after him? Reddit users dug up several pleas that Lang posted on social media just days before he was found dead. 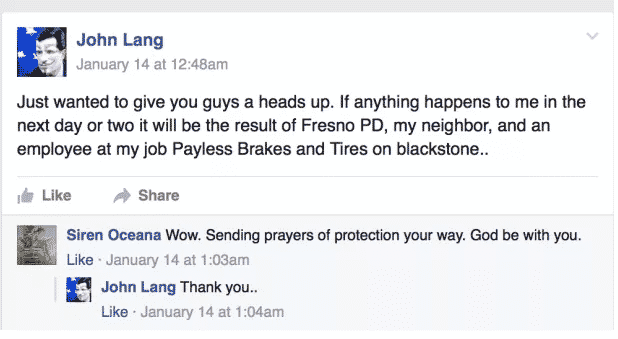 It seems as if Lang had some beef with the Fresno Police about some corrupt activities going on. Lang shared a conversation explaining what he knew and why it would get him into trouble:

Mac McCauley · Granite Bay, California What occured in your life to bring you to the attention of the cops, both city and county, that you believe you are being stalked?

Mac McCauley I simply voice my opinion regarding local government and politics on local blogs. I also discovered local law enforcement had been running a license plate scanning scam where Fresno Cops would scan license plates at Retail Store parking lots (Save Mart, Von’s, HomeDepot, etc.) in lower income neighborhoods. After collecting hits of violations they then would pull the unsuspecting drivers over a few blocks away from the store location in a marked police vehicle claiming they simply came across their vehicle through routine driving patrols. This unethical and possibly illegal activity was simply motivated by “profit” and unfairly targeted Fresno’s poorer residents. I also discovered the Fresno Bee was sharing chat log data with Fresno Law Enforcement of Fresno citizens who were critical of local Fresno Government and Fresno Law Enforcement. Fresno Law Enforcement subsequently used the ip addresses in the chat logs provided by the Bee to track down, stalk, and harass those chat bloggers who were critical of local politics and local law enforcement. Since publicly exposing these local law enforcement activities it’s been a constant onslaught of stalking, harassment, and intimidation directed toward myself from Fresno Law Enforcement. They even tried to set me up and plant false evidence in my home. I filed a request for an Internal Affairs Investigation and that seemed to enrage them even more. They are simply trying to destroy me by any means possible. I am in constant fear for my life. As Kevin Arial, a Face Book pseudonym and alias of a known local cop so eloquently posted to my Face Book page recently: “First rule of fight club is you do not talk about fight club, You should know this Mr. Lang! ; D”. End quote..

He even reached out to local media outlets.

After seeing the suspicious van and men sneaking into the vacant building next door, Lang tried to get some extra protection. 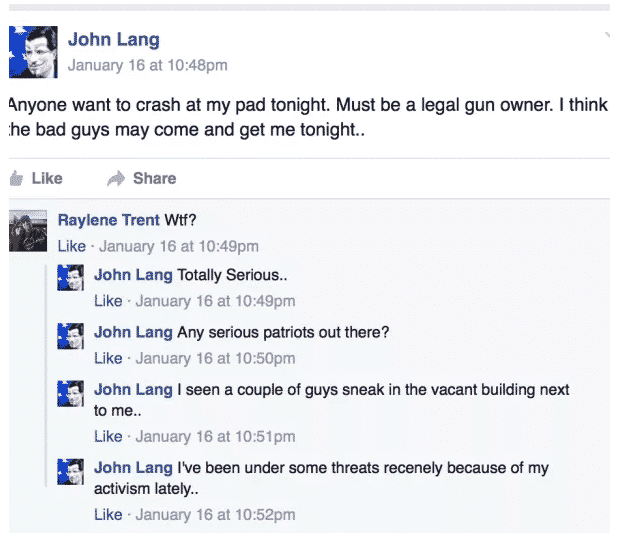 Unfortunately, many thought Lang was being paranoid and brushed his accusations to the side. That is until he was found dead. The Fresno People’s Media posted an in-depth article about Lang’s story. They even said he had contacted them several times in the past, but had he was just a paranoid conspiracy theorist.

What do you think? Was Lang the victim of city corruption or a random murder?

Man Found Guilty of Trying to Murder a Corpse