The weathermen warned us that Winter Storm Jonas would be intense and means LOTS of snow. And that it was.

Those that don’t live in the area hit by the storm were able to keep up to date by photos and videos on social media. We knew it was a lot of precipiation, but some place reached more than 40 inches of the white stuff. This Texas girl can’t even imagine that much snow! 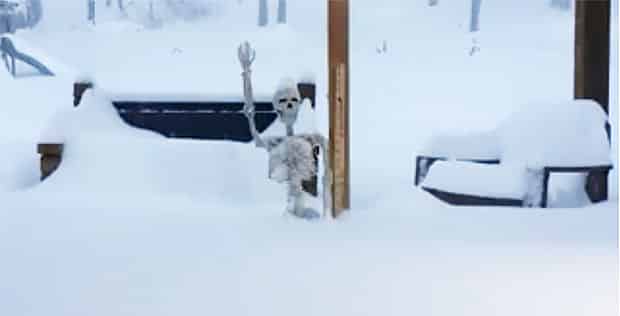 One West Virginia man took upon himself to chronicle this epic blizzard to show the world just how much powder this storm dropped on his hometown. Little did Wayne Bennet know, but he would become a viral superstar.

Bennett created a time-lapse video of the storm by taking photos throughout the storm with his iPhone. The video shows the outrageous amount of snowfall. A skeleton stands in the yard to show the snow level. Eventually, it disappears…

You have to check out this video.

Crazy, right? Well, we weren’t the only ones to think that. The video was uploaded to Bennett’s personal Facebook page and quickly went viral. With more than 3 million views on Facebook alone, Bennett will always be remembered as that snow guy.

As a self-professed “weather hobbyist,” Bennett said he can’t wait to do a timelapse video of all that snow melting. Neither can we.

Snowmobile Gets Caught In Avalanche [Video]