This man sent a clear message to The Man the day he quit his job and stole all the chicken nuggets.

Someone who goes by the Twitter handle Zealot has habout had it with working at his local Burger King, drove off into the sunset with a big bag of chicken nuggets sitting shotgun. What exactly did he do at the fastfood joint? did he flip burgers? Work the cash register? Do cleanup on the floor? We may never know, but one thing is clear: He certainly went home richer in chicken nuggets.

TODAY WAS MY LAST DAY WORKING AT BURGER KING SO I TOOK ALL OF THEIR NUGGETS, FUCK IT pic.twitter.com/ODJZe5YgBF

Just look at the care he put into buckling up these two bags. See him pat them chicken-tenderly. Truly, they are treasures on this earth. 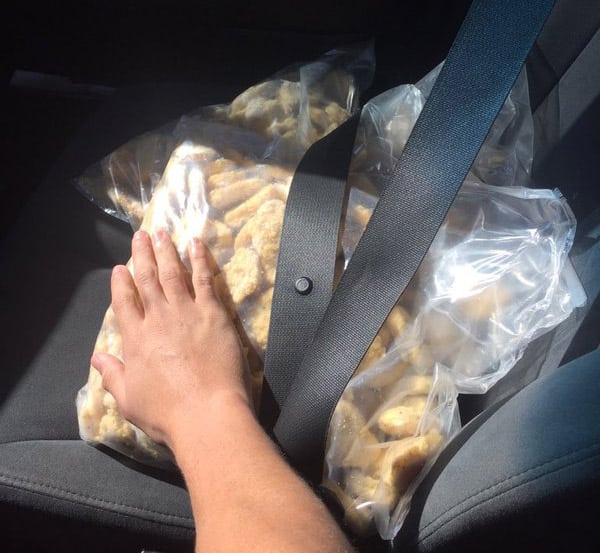 Other people understood the deep intrinsic value of the aforementioned deep-friend golden nuggets of chicken deliciousness, and wanted in on this trove.

@johnalexcorrea hook me up pls

Indeed, the (chicken nugget) force is strong in this one.

@johnalexcorrea fighting big fast food one hero at a time?

In time, Zealot launched into an inspirational, motivational Twitter thread on individuality, authenticity, and progress.

who the fuck cares about what other people don’t like about you? THEY ARENT YOU. why do you care about another girls makeup? SHES NOT YOU

What have you refrained from doing simply because you were afraid of what others would think about it? Try new things fuck everyone else

And vice-versa, why do you care when someone else tries something a little more different from what YOU are used to? That’s how we advance

Value yourself and value others man. We’re all beautiful in our own ways just accept it it’s NOT THAT HARD.

Truly an example for our modern times.

McDonalds Nopes Out of ‘McWhopper’ Peace Talks with Burger King