Cancer is awful. It’s a fact we all know. Despite race, age, gender, cancer affects thousands everyday. Some survive, but many lose their life to this horrible disease. These tragic ending have seem to play out in the headlines the last few weeks. It seems as if each day, social media announced the passing of yet another. 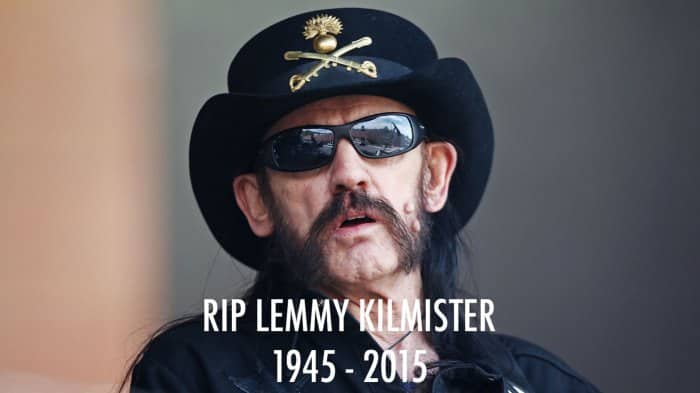 The front man for the rock band, Motorhead lived life to the extreme. Up until the day he died, he smoked like a chimney, drank like a fountain, collected Nazi memorabilia and did not give a damn about, well, anything. Sure, he lived a hard lifestyle. Jack and Cokes for breakfast, numerous sexual partners and drugs all day eventually led to health problems. Despite his extreme choices, he lived a lot longer than most. Rest in peace to everyone’s favorite bad example. 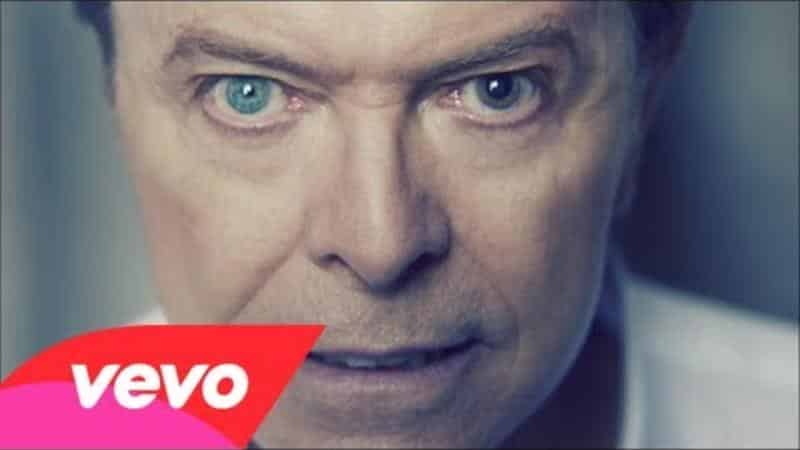 Just days after Lemmy’s death, another musical icon left this world. Bowie was a singer, songwriter, actor, painter and innovated everything he set him mind to. He changed the nature of rock music and broke the mold. He remained a constant force to be reckoned with and kept making music until he lost his battle with liver cancer. Shortly before his death, he released an eerily foreshadowing music video featuring him in a hospital bed.

Bowie’s son recently returned to social media to share a letter from his father’s palliative care doctor. Dr. Mark Taubert wrote about how Bowie’s battle taught him about caring for a dying patient. The letter is going viral on social media and extremely heart-wrenching. It is worth a read.

Oh no, don’t say it’s true – whilst realization of your death was sinking in during those grey, cold January days of 2016, many of us went on with our day jobs. At the beginning of that week I had a discussion with a hospital patient, facing the end of her life. We discussed your death and your music, and it got us talking about numerous weighty subjects, that are not always straightforward to discuss with someone facing their own demise. In fact, your story became a way for us to communicate very openly about death, something many doctors and nurses struggle to introduce as a topic of conversation. But before I delve further into the aforementioned exchange, I’d like to get a few other things off my chest, and I hope you don’t find them a saddening bore.

Thank you for the Eighties when your ChangesOneBowie album provided us with hours of joyful listening, in particular on a trip from Darmstadt to Cologne and back. My friends and I will probably always associate Diamond Dogs, Rebel Rebel, China Girl and Golden Years with that particular time in our lives. Needless to say, we had a great time in Köln.

Thank you for Berlin, especially early on, when your songs provided some of the musical backdrop to what was happening in East and West Germany. I still have ‘Helden’ on vinyl and played it again when I heard you had died (you’ll be pleased to hear that Helden will also feature in our next Analogue Music Club in the Pilot pub in Penarth later this month). Some may associate David Hasselhoff with the fall of the wall and reunification; but many Germans probably wish that time had taken a cigarette and put it in Mr Hasselhoff’s mouth around that time, rather than hear “I’ve been looking for freedom” endlessly on the radio. For me that time in our history is sound tracked by ‘Heroes’.

Thanks also on behalf of my friend Ifan, who went to one of your gigs in Cardiff. His sister Haf was on the doors that night and I heard a rumour that Ifan managed to sneak in for free (he says sorry!). You gave him and his mate a wave from the stage which will remain in his memory forever.

Thank you for Lazarus and Blackstar. I am a palliative care doctor, and what you have done in the time surrounding your death has had a profound effect on me and many people I work with. Your album is strewn with references, hints and allusions. As always, you don’t make interpretation all that easy, but perhaps that isn’t the point. I have often heard how meticulous you were in your life. For me, the fact that your gentle death at home coincided so closely with the release of your album, with its good-bye message, in my mind is unlikely to be coincidence. All of this was carefully planned, to become a work of death art. The video of Lazarus is very deep and many of the scenes will mean different things to us all; for me it is about dealing with the past when you are faced with inevitable death.

Your death at home. Many people I talk to as part of my job think that death predominantly happens in hospitals, in very clinical settings, but I presume you chose home and planned this in some detail. This is one of our aims in palliative care, and your ability to achieve this may mean that others will see it as an option they would like fulfilled. The photos that emerged of you some days after your death, were said to be from the last weeks of your life. I do not know whether this is correct, but I am certain that many of us would like to carry off a sharp suit in the same way that you did in those photos. You looked great, as always, and it seemed in direct defiance of all the scary monsters that the last weeks of life can be associated with.

For your symptom control needs, you will presumably have had palliative care professionals advise on pain, nausea, vomiting, breathlessness, and I can imagine they did this well. I envisage that they also discussed any emotional anguish you may have had.

For your advance care planning (i.e. planning heath and care decisions prior to things getting worse and before becoming unable to express them), I am certain you will have had a lot of ideas, expectations, prior decisions and stipulations. These may have been set out clearly in writing, near your bed at home, so that everyone who met you was clear on what you wanted, regardless of your ability to communicate. It is an area not just palliative care professionals, but in fact all healthcare workers want to provide and improve, so that it is less likely that any sudden health incidents will automatically result in a blue-light ambulance emergency room admission. Especially when people become unable to speak for themselves.

And I doubt that anyone will have given you Cardiopulmonary Resuscitation (CPR) in the last hours/days of your life, or even considered it. Regrettably, some patients who have not actively opted out of this treatment still receive it, by default. It involves physical, sometimes bone-breaking chest compressions, electric shocks, injections and insertion of airways and is only successful in 1-2% of patients whose cancer has spread to other organs in their body. It is very likely that you asked your medical team to issue you with a Do Not Attempt Cardiopulmonary Resuscitation order. I can only imagine what it must have been like to discuss this, but you were once again a hero, or a ‘Held’, even at this most challenging time of your life. And the professionals who saw you will have had good knowledge and skill in the provision of palliative and end-of-life care. Sadly, this essential part of training is not always available for junior healthcare professionals, including doctors and nurses, and is sometimes overlooked or under-prioritized by those who plan their education. I think if you were ever to return (as Lazarus did), you would be a firm advocate for good palliative care training being available everywhere.

So back to the conversation I had with the lady who had recently received the news that she had advanced cancer that had spread, and that she would probably not live much longer than a year or so. She talked about you and loved your music, but for some reason was not impressed by your Ziggy Stardust outfit (she was not sure whether you were a boy or a girl). She too, had memories of places and events for which you provided an idiosyncratic soundtrack. And then we talked about a good death, the dying moments and what these typically look like. And we talked about palliative care and how it can help. She told me about her mother’s and her father’s death, and that she wanted to be at home when things progressed, not in a hospital or emergency room, but that she’d happily transfer to the local hospice should her symptoms be too challenging to treat at home.

We both wondered who may have been around you when you took your last breath and whether anyone was holding your hand. I believe this was an aspect of the vision she had of her own dying moments that was of utmost importance to her, and you gave her a way of expressing this most personal longing to me, a relative stranger.

Rickman was known for great films, such as Harry Potter and Die Hard. His death came as a shock to the world after his short private battle with cancer. Fans and celebrities remembered him fondly. Even Harry Potter author, J.K. Rowling tweeted her tribute to the only actor that could portray Professor Snape.

There are no words to express how shocked and devastated I am to hear of Alan Rickman's death. He was a magnificent actor & a wonderful man.

She not only shared her tribute, but later sent her condolences to Rickman’s family.

Angelil was not only Celine Dion’s longtime manager, but also her husband. He battled throat cancer since 208. Him and his wife built a reputation as cultural icons.

As if Dion wasn’t going through enough grief, her brother passed away just a few days later of cancer as well.

With the recent passings, social media is banding together to give a big middle finger to cancer for taking these icons. 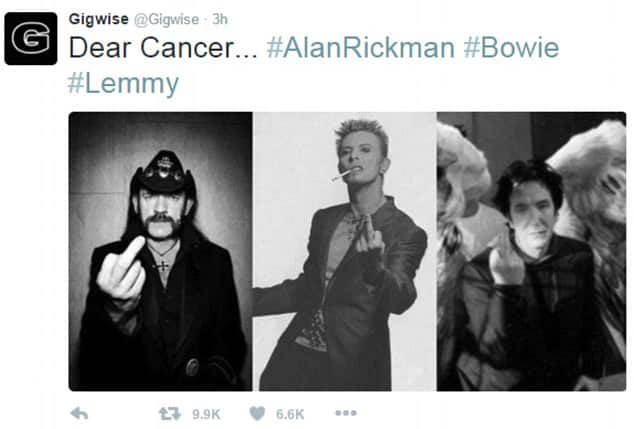