We just may have lived long enough to see that K-Pop will save the world.

South Korea said No. The United Nations said No. Many countries around the world said No. And still, Kim Jong Un insisted on giving his nuclear bomb tests another go.

Just as he started turning up the heat for his fourth nuclear test, Seoul turned up the volume on their speakers and blasted their own version of loudspeaker warfare. Out came K-pop ballads and Korean rap music, propaganda blasts in the form of preppy bubblegum pop ad catch beats — the very things that sent the Supreme Leader’s skin crawling.

This all happened on the eve of Kim’s 33rd birthday, by the way — which would make you think, oh how nice, South Korea is bringing the party beats to this celebration. Unfortunately, North Korea took this gesture as an act of war, which can be kind of telling of how President Kim thinks of fun things. 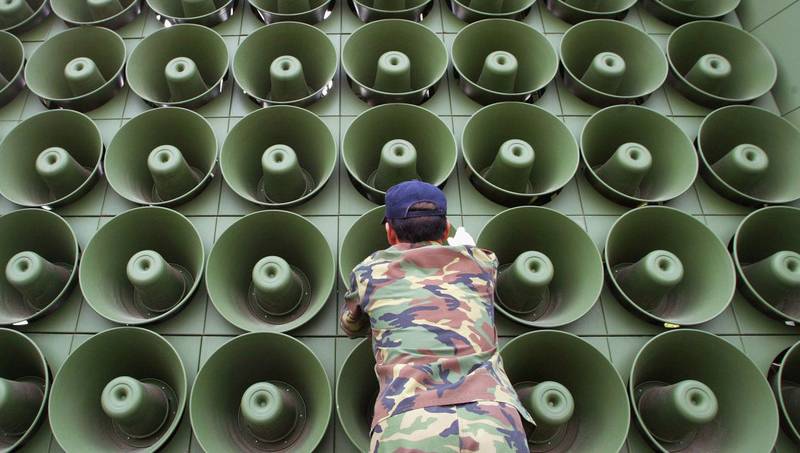 The K-Pop songs included in the playlist also make an interesting statement about the two country’s current affairs. Check out this snippet from The Associated Press:

A song by Lee Ae-ran whose title can be translated as “100 years of life” sends messages to death, or a god from the underworld, saying it isn’t yet time to say goodbye to living.

It was so popular among young and old that Kakao Talk, South Korea’s most popular messenger app, created emoticons, or animated images, from the music video. The song inspired a host of online parodies and memes, and political parties reportedly sought to use it in their campaigns during upcoming general elections.

Also echoing over the Demilitarized Zone: GFriend’s “Me Gustas Tu,” about a girl who is trying to muster courage and overcome shyness to ask a boy out. GFriend rose to fame last year when a fan posted a video on YouTube showing its members standing up after falling several times on a slippery stage to complete an outdoor performance. The YouTube video has nearly 9 million views since it was uploaded in September.

So, might there be any chnce of President Kim lightening up and even maybe breaking out some moves to “Oppa Gangnam Style”? We’re not holding our breath for it just yet.