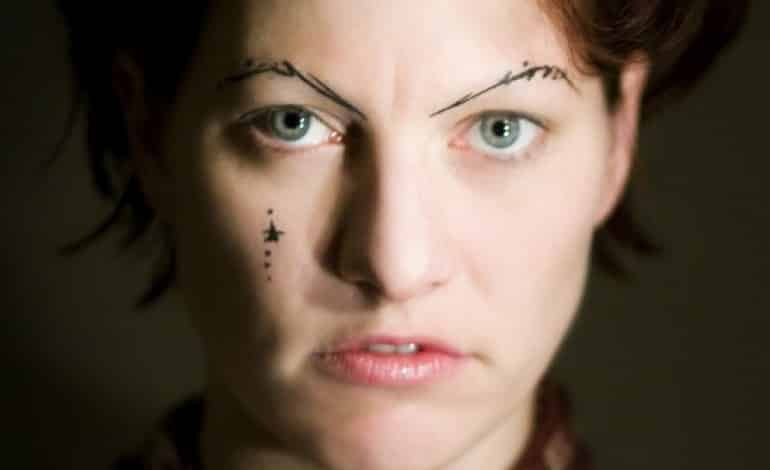 Amanda Palmer has never been shy about her body. From her roots as a street performance artist/ living statue, to her stint as a stripper, to her performances as half of The Dresden Dolls and launching into her solo career, Amanda has gone topless, stripped to her birthday suit in protest performances and trust exercises with her fans. which pretty much leaves her (and us) wondering why the Daily Mail chose to feature a nip slip of hers while she performed onstage in a Glastonbury concert.

So Amanda Palmer did what she was wont to do, and sent Daily Mail a message — in 3/4th time, with a massive gesture in the middle to send the message home. [NSFW-ness starts at the 2:56 mark.]

She pretty much makes a spot-on prediction with one of the song’s verses:

Dear Daily Mail,
You will never write about this night,
I know that because I’ve addressed you directly
I’ve made myself no fun to fight,
But thanks to the internet people all over the world
Can enjoy this discourse,
And commune with a roomful of people in London
Who aren’t drinking Kool-Aid like yours.

Amanda Palmer let the kimono drop, and sang her song, and her fans went wild. True enough, not a peep was heard out of Daily Mail after that, but Amanda’s bold move would live on on Youtube. amanda is no stranger to going viral; this and her TED talk spread like wildfire. It resulted in more fans raising more support for her Kickstarter, and helped her project reach unprecedented heights of funding and camaraderie.

In the meantime, keep doing you, Amanda. your husband Neil Gaiman and your son Anthony are proud to have you, and we’d all have you no other way.

Watch Amanda Palmer explain her riposte on a one-on-one below:

Will Smith disclosed in a podcast interview recently that he would “consider” running for president “at some point.” In an interview released Monday, the 52-year-old rapper told Crooked Media’s “Pod Save America”: “I think for now I’ll let that office get cleaned up a little bit. And then I’ll consider that at some point down… END_OF_DOCUMENT_TOKEN_TO_BE_REPLACED

Vaccination programs are currently on roll-out and countries that vaccinated for COVID-19 are talking. Questions are everywhere, and it is building up people’s anxieties about vaccination. How has the vaccine affected their population? Are the vaccines any good? Should we research more on newer vaccines? Can the vaccines kill the mutated virus? The answers change… END_OF_DOCUMENT_TOKEN_TO_BE_REPLACED

Texas Senator, Ted Cruz, received heavy criticism after taking a vacation to Cancun with his family in the middle of a crisis. The latest power crisis in Texas left hundreds of homes without electricity and water for more than 48 hours in negative degree weather. This has left the lives of many Texas residents in… END_OF_DOCUMENT_TOKEN_TO_BE_REPLACED