Apple is winning us all over with one autocorrect at a time.

Oh, iPhone. We have such a love-hate relationship with you. We love our iPhone so much, but yet can’t help but feel a pang of rage when we walk out of the store with a brand new phone, only to discover a billboard announcing the release of a new model.

We remained loyal when our iPhone bent in our back pocket. Or when we barely dropped it on our desk and the screen shattered into a million pieces (about that, how did this happen?) We didn’t even think about touching an Android phone, even when we discovered U2’s album was stuck on our music playlist.

We always stood by your side and now you have made it very clear that we chose the right side.

The Kardashian family is everywhere. They drive us crazy and you get that. Thanks to one of your clever developers, a hilarious auto-correct celebrates that we all can’t stand the Kardashians. Imagine our delight when we discovered ‘lardass’ is autocorrected to ‘kardashian.’ Props to the pop culture loving programmer who snuck this little ‘easter egg’ into Apple’s new iOs 9.2 software update.

Of course, news of this hilarious switch spread like wildfire throughout social media. 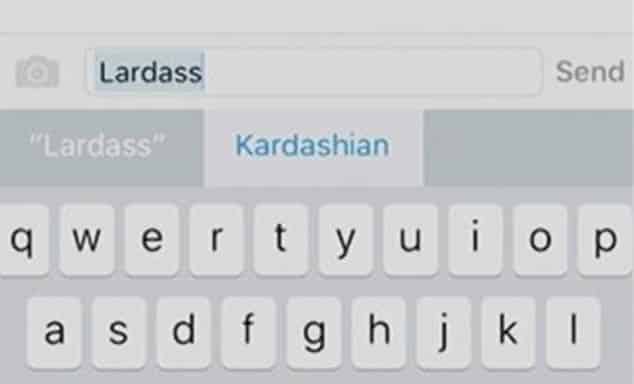 Of course, Apple has not commented on the autocorrect news. Sources with the company did say they weren’t sure if the switch was made by a staff member or simply a result of artificial intelligence based on how people are using their phones. Let’s be honest, everyone has texted something about Kim Kardashian’s backside at some point in their lives.