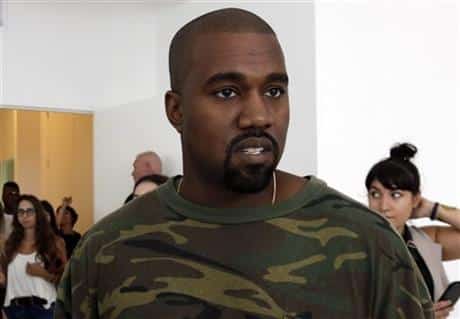 Award-winning recording artist and self-certified genius Kanye West stopped by a fashion-industry awards ceremony on December 2nd. His shoe, the Adidas Yeezy Boost, was to be honored at the Footwear News Achievement Awards—practically the Golden Globes of the cobbler world.

Kanye, having found himself at such a prestigious event, and among such esteemed colleagues, opened up and spoke from the heart… for twenty minutes.

The Associated Press compiled some of the epic speech’s best moments:

“I completely, you know, have absolutely no plans for what I’m going to say. This could land completely wrong, but it doesn’t really (bleeping) matter, does it? … You can go to the bathroom.”

I can only hope a few audience members took this as a cue to leave.

“Basically as I talk, it’s just a mood board. That’s my new style of speeches. It’s very unorthodox. It’s vibes, you know. You guys are designers. You know how to put it all together at the end of the night. Or you feel free to just talk (bleep). It’s good to have someone to talk (bleep) about. Everybody’s so, like, I just don’t want people to talk (bleep) about me. I don’t give a (bleep), you know.”

Kanye calls his public speaking style “unorthodox.” I think it’s only unorthodox if you aren’t used to being around people who are really, really high.

“As a creative, it doesn’t matter how big the house is, how big your name is, how much money you have, your job is to create while you’re here, and if anyone is in the way of that, if anything gets in the way of that, if anything is stopping that or slowing it down, you’ve got to burn it to the (bleeping) ground. You have to die. This is me talking to you. I’m not giving you any suggestions. You have to die for what is in you because that thing might inspire someone.”

Wait, so I have to burn the thing that’s in my way to the (bleeping) ground, but I also have to die?! The only way to let the something inside me escape is if I die, which is worth it because either my death or the mysterious “thing” inside me will inspire someone. Inspire them to do what? I don’t know. It doesn’t really seem worth it to me. But then again, what the hell is this thing inside me, and how do I get it out without killing myself?

I wonder if this part is difficult to comprehend because I know nothing about the fashion industry, or because Kanye West can’t hold his weed?

“When I was at Fendi … we’d visit Stockholm, you know, on the weekends. That was in my single days. It was fun. … My exile (after cutting off Taylor Swift on stage) was pretty fun. You know, what does Kanye do when he pisses every white person off on the planet? He goes to Stockholm and dances with more white people!”

“I look at you guys and think, like, raise your hand if you got a private plane. Don’t be embarrassed. There’s definitely some people with some private planes tonight. … We’re here to make amazing product that we love that also sells, that makes money. We really like nice things. … I want a house equal or better than Calvin Klein’s house in the Hamptons.”

“I’m trying to take it full ‘Will Ferrell level drunk brother at the wedding’ level. Have I reached that level yet? Have I (bleeped) it up? Good. Here’s to (bleeping) everything up!”

Gift-giving isn’t just a seasonal affair between friends, families and acquaintances. The art of gift-giving is also conducted on a national scale with countries often sending each other big, weird and expensive gifts. Experts in all things gifts, Vanilla Reindeer put together some examples of these expensive and odd gifts that have been shared between… END_OF_DOCUMENT_TOKEN_TO_BE_REPLACED

There are lots of ways you can make Pres. Trump feel welcome: you can offer him coffee, or mow a penis into a field for him to view as his plane lands. The willie in question has been chopped by Born Eco ahead of the arrival of President Trump, who visited the UK Monday for… END_OF_DOCUMENT_TOKEN_TO_BE_REPLACED

The year isn’t even halfway over, yet Donald Trump has managed to make a fool of himself and our country countless times. From inviting the national college football champions, the Clemson Tigers, all the way to the White House for some McDonald’s to his to the dreaded results of Mueller’s investigation, it has been one… END_OF_DOCUMENT_TOKEN_TO_BE_REPLACED

Republicans have always said that when they gained control in Congress, they would work to overturn Roe v. Wade and here they are, cashing in on that promise one state at a time. So far, Alabama, Arkansas, Georgia, Kentucky, Missouri, and Ohio have all passed incredibly restrictive laws on abortions, making it illegal for women… END_OF_DOCUMENT_TOKEN_TO_BE_REPLACED

If you’re on Snapchat, then you’ve probably played around with (and were likely horrified by) their filter gender swap filters. While you’re probably using these filters to send hilarious pics to your friends, some guys using them to create Tinder profiles. What likely started out as a joke has quickly evolved, and these guys are… END_OF_DOCUMENT_TOKEN_TO_BE_REPLACED

“Milkshaking” is a hilarious trend in Britain where a milkshake is thrown at and ideally lands on a far-right politician or activist. The point of this nonviolence protest is to humiliate them without causing injury. Physical injury at least. There’s no doubt that milkshaking has led to a few bruised egos. Not only is this… END_OF_DOCUMENT_TOKEN_TO_BE_REPLACED