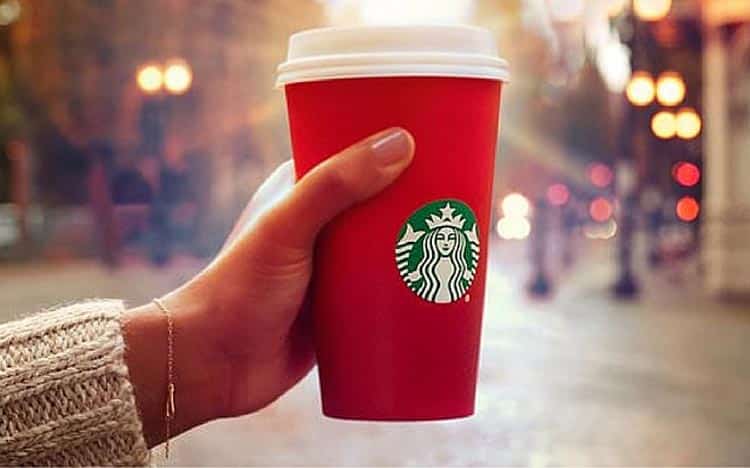 Christmas is a time for joy, giving, and unity — unfortunately for brands like Starbucks, some people also see it as a time to get really worked up about packaging choices.

A number of Evangelical Christians have taken umbrage at Starbuck’s decision to go do away with their usual imagery of snowflakes, snowmen, and sleigh bells and opt for a minimalistic red ombre design for their cups.Some went as far as positing that the company removed their images of reindeer, Christmas trees, and snow because it “hates Jesus”.

Ex-pastor Joshua Feuerstein’s prank went viral when he told the Starbucks crew his name was “Merry Christmas” so baristas will have to write the names on the cups and call them out in the shop. He even proudly brandished a gun he brought into the shop with him, and encouraged viewed to start a “Merry Christmas” movement.

On the other side of the issue, a number of other people brook no issue with the cup design and instead gave the Internet a piece of their minds on the people who actually took offense with it and blew the issue out of proportion. As always, sarcasm was employed to the hilt.

I just went into Starbucks and forced them to draw a detailed, historically accurate nativity scene on my cup.

As you ignore the cold homeless guy sitting outside Starbucks, please be sure to complain about the 'non-christian' red cup of $5 coffee.

Other Christians called out the ridiculousness of the whole situation.

As a Christian, I can tell you that the color of Starbucks cups have nothing to do with Jesus, the gospel, or Christianity. They are cups.

Some asked the question: why just one world religion, anyway?

Snowflakes became a major crux of the matter.

#MerryChristmasStarbucks Leave it to Americans to get pissed off about a coffee cup without snowflakes on it.

I support your plain red cup design, @Starbucks. Plus, there are snowflakes on the sleeves! #MerryChristmasStarbucks pic.twitter.com/o6Ezav7PLb

There, they fixed the cups. (Solutions include one infamous image hanging in presidential candidate Ben Carson’s home.)

. @Starbucks just put this on your next Christmas cup pic.twitter.com/gxxLICiadz

The only thing I care about when it comes to my Starbucks cup is that it’s full. https://t.co/ckw8BYdWCG pic.twitter.com/XFDydOleZi

Seriously? #merrychristmasstarbucks is a thing? If only there were *real* problems in the world….. #idiocracy pic.twitter.com/beKf6YFXqF

#NationalCoffeeDay: Some Things You Didn’t Know About Coffee

Will Smith disclosed in a podcast interview recently that he would “consider” running for president “at some point.” In an interview released Monday, the 52-year-old rapper told Crooked Media’s “Pod Save America”: “I think for now I’ll let that office get cleaned up a little bit. And then I’ll consider that at some point down… END_OF_DOCUMENT_TOKEN_TO_BE_REPLACED

Vaccination programs are currently on roll-out and countries that vaccinated for COVID-19 are talking. Questions are everywhere, and it is building up people’s anxieties about vaccination. How has the vaccine affected their population? Are the vaccines any good? Should we research more on newer vaccines? Can the vaccines kill the mutated virus? The answers change… END_OF_DOCUMENT_TOKEN_TO_BE_REPLACED

Texas Senator, Ted Cruz, received heavy criticism after taking a vacation to Cancun with his family in the middle of a crisis. The latest power crisis in Texas left hundreds of homes without electricity and water for more than 48 hours in negative degree weather. This has left the lives of many Texas residents in… END_OF_DOCUMENT_TOKEN_TO_BE_REPLACED