UPDATE: 11/10/15 — The team behind Rumble has announced the project was an elaborate hoax, intended to market a creative consulting agency. We can’t say we aren’t relieved.

The digital marketplace is one of infinite possibility. The phrase “there’s an app for that” might be a dreadful cliche, but it’s also the truth. Anything and everything we could ever want in our phones is possible thanks to the rise of mobile app technology.

But as you’ll find out here, not every idea is a winner. In fact, you have to wonder how some of these ever saw the light of day. Take, for example, Rumblr—a Tinder-style app for street fighters that’s launching today. Yes, you read that correctly—street fighters. An audience who either only exist in video games or aren’t going to bother using an app to find brawling partners. Seriously, when was the last time you saw your neighborhood tough guy setting appointments for brawls? 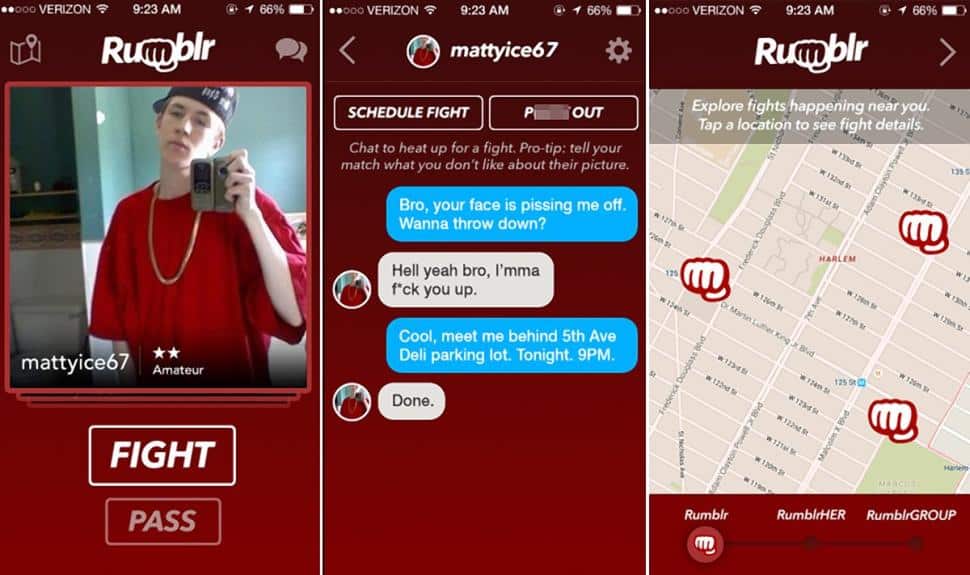 Although many people thought it was a joke at first (rightly so, seeing how ridiculous the premise is), the app is indeed genuine. Of course, you could just join a local boxing gym or…really, anything else than using this shady application to meet with people and engage in illegal street fights.

This isn’t the first time an app idea has generated controversy.

Peeple was to be a Yelp-style reviewing app. But rather than rate restaurants and businesses, it was to allow you to rate people. Yes, as in review human beings. Upon its announcement, the world collectively sighed “No, thanks.”

Not everybody was so passive about the app’s existence. It ignited, as they say, a “firestorm of controversy” online, with many criticizing the app’s premise. The creators say the public is mistaken about their project, and are going to continue with its development. Fingers crossed the creepy person-rating elements will be toned down.

“Peeple” App Lets You Rate People — Without Them Knowing