In the past, we’ve covered how parents got themselves tattooed for their daughter. Now, here’s one father-daughter duo who have come under the critical eye of the social media public.

Brad “Bob Tat” Bellomo is the owner of Third Eye Tattoo Shop & Recording Studio in Largo, Florida. as well as a doting father to his 4-year-old daughter, Chloe. His little bundle of joy has gone beyond coloring books and has shown great interest in her father’s work and art, so much so that she often accompanies him to his shop and watches him practice his painstaking craft on his clients.”She had come in a few times,” Brad said. “Watched other artists and myself doing the art and she said, ‘I want to do one.’  So I gave her the chance.”

One day, Chloe finally was allowed to wield her father’s tattooing machine for the first time. “I’ve been teaching her about [tattooing],” Bellomo told HuffPost, “so that was her first try.”

Chloe had long been asking her dad to let her give tattooing a go. They both decided on her own rendition of a strawberry, a nod to a nickname Bob Tat for his daughter. The origin for the choice as as adorable as the final result.

“We sang ‘Baa Baa Black Sheep’ and for a while she’s been singing it ‘Have you berry wu?'” Bellomo said.  He started calling his daughter “Berry Wu.” He plans to add the Wu-Tang Clan W to the ink a little later on, he shared.

Little Chloe was quite proud of her work, and proud dad Brad put up a photo on Facebook of her masterpiece. Unfortunately, this post drew ire and criticism from other users on his parenting skills, and a handful of offense reports prompted Facebook to shut down his page.

“It’s a positive thing that got mostly positive support,” Bellomo explained, “but people reported it for nudity and just people hating, and trying to get it off there saying it was offensive.” since then, Facebook has made it difficult for him to log back on, and the shutdown has hurt his business.

Thankfully, the support and cheering for his and Chloe’s bonding experience has overshadowed the hate. It seems Facebook has finally seen the light and put the page back on, and now we get to see all the wonderful things the duo’s fans have for them: 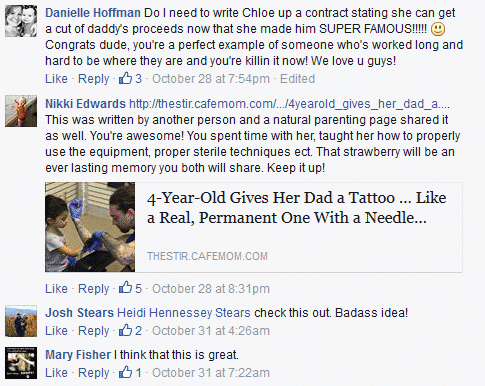 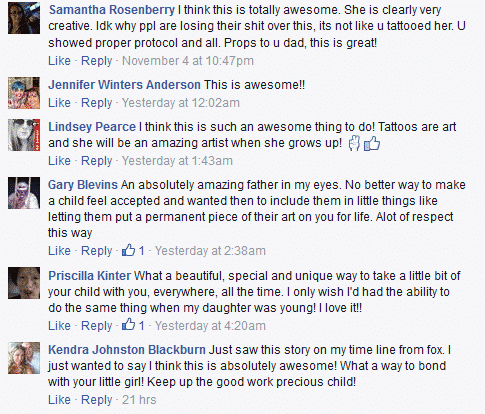 Check out Bob Tat’s studio in the video below:

Zelda Williams Gets Tattoo In Memory Of Robin Williams

Man Gets Sunglasses Tattooed To His Face After Drunken Night