Man Gets Sunglasses Tattooed To His Face After Drunken Night

It is like a scene straight out of The Hangover. One South Wales man awoke from a night of crazy drunkiness to find sunglasses painted on his face. At first, he thought one of his sneaky friends had a little fun with a Sharpie marker. As he examined his “sunglasses”, he even noticed the words Rayban written on his temples. That’s when he noticed something even more alarming, this wasn’t Sharpie. This was a tattoo.

This man woke up after a stag do with 'Ray Ban' sunglasses tattooed on his face https://t.co/5nCSRyxOpz pic.twitter.com/tKVGtoZxsO

Now, the man had a slightly strange reaction to the ridiculous tattoo. He has reportedly decided to keep it, saying:

“When I first came home, obviously I was subject to a lot of stares, but I kind of got used to the tattoo and decided not to get rid of it.”

But, then it seems rational thinking took over and he had a change of heart. This fifty-something year old man has undergone laser treatments in a two-year, six-treatment process. Throughout the years, he has been left with temporary turquoise markings around his eyes. Not exactly the best look. In fact, the tattoo was so bad that even the owner of the tattoo-removal clinic said it was one of the worst tattoo mistakes he had ever seen. 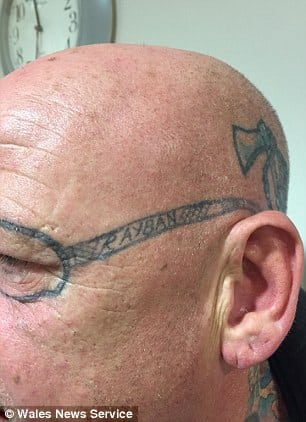 Here’s the good news, the man is now tattoo free, without any scarring. We can’t say that much about his ego.