by Meagan Freeman 7 years ago8 months ago

Hey there, fellow millennial. Chances are you are reading this on your phone. Probably with a friend or in a public place. Yep, I knew it. Well, guess what! Stop! (Wait, finish reading this first. Then stop.)

A new study is showing just how addicted to social media our generation has become. How often do you find yourself with a group of friends, only to notice that everyone is staring down at their phones? All of the things happening around you and you’ve missed them because you were glued to your phone. I’m sure you’ve already heard this soapbox message before, but now I’m here to present some interesting statistics that might put things in perspective. 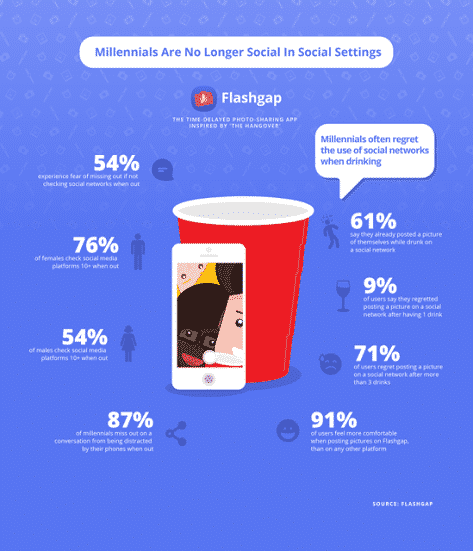 If you and your friends are guilty for spending most of your time on your phone when you are hanging out, you’re not alone. A new survey revealed that millennials are obsessed with social media and it is affecting their real social life. 87 percent of millennials admitted to missing out on a conversation from being distracted by their phones when out. The survey goes on to show that it seems that females are slightly more addicted. However, the fellas are pretty guilty too. 54 percent of males said they check social media platforms 10+ when out. 76 percent of females say they check social media platforms 10+ when out.

So, why are millennials missing out on real life to check on their virtual one? Ironically, 54 percent said they were experiencing fear of missing out, if not checking social networks when out.

What’s even worse than a social media addiction? Add in alcohol and that is a recipe for regret and embarrassment. Think drunk texting, but only sending a message to your thousands of social media followers. Yep, the study also revealed millennials also often regret the use of social networks when drinking. Well, of course. All those drunk selfies, declarations of love to exes or crushes or revealing messages…

Now, we can’t do much about our social media obsession. Those selfies seem to be here to stay. However, a new app seems to be the answer to saving people from social media shame. Flashgap is a time-delayed photo-sharing app. With more than 150,000 users, Flashgap seems to be successful. The app was inspired by the hit film, ‘The Hangover’ (well of course).

Flashgap works like this. You and your friends can take all the photos and videos you want of your night out. But, here is the catch. The photos and videos disappear. You aren’t allowed to see them. Then at 12 p.m. the next day, the content is made available to you. This will allow you to refresh your memory of the night’s shenanigans. Then, you can make a clear-headed decision of what to share and what to keep private.

Flashgap is available in the Apple App store and Google Play store for free. So, what do you think? If you can’t keep yourself off of social media, do you think this is the answer?