Even organized criminals, like the Yakuza, have a soft spot for Halloween, too. Problem is, they won’t be able to get into the spirit of it this year.

The Yamaguchi-gumi in Kobe hold the title of the biggest yakuza group in Japan. They are also one of the world’s wealthiest gangsters, bringing in billions of dollars from extortion, gambling, arms dealerships, real estate and construction kickback schemes, just to name a few of their “businesses”. They also have a hand in the Japanese stock market and online pornography industry, with members ranking up to the thousands world-wide.

So, why is one of the shadiest groups in the world getting in on the action on Halloween? And why give candy to innocent kids, too?

Well, these boys, they just wanna have fun. The group enjoys the holiday so much, they’ve turned it into an annual tradition.

With Halloween becoming a rising trend in Japan, it’s just natural that the Yamaguchi-gumi want in on the fun, too. Kids and their parents who do approach their “offices” do leave with the “goods” their arms heavy with bags of candy — and we do mean bags of candy. Just look at that loot from last year! 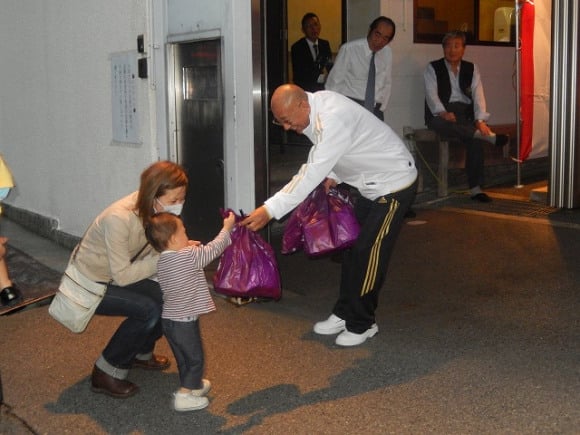 Imagine each kid coming home from the Yakuza stronghold, beaming with joy from the mightiest of loot bags. You may begin to wonder: where exactly did all that candy come from? did they have to extort it from other kids?

No one knows for sure, but these really are offers (of candy) you can’t refuse. 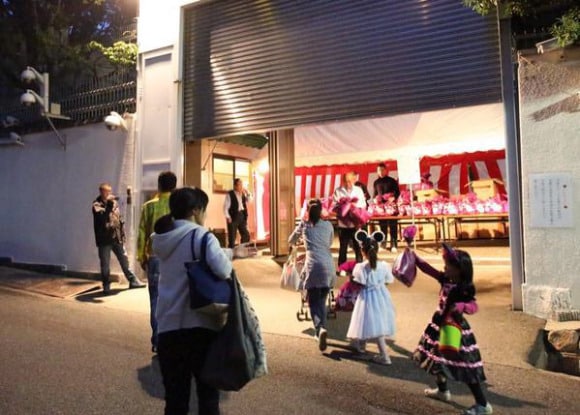 Unfortunately for their little fans, the Yamaguchi-gumi’s gates will be closed for this year’s Halloween. Instead of warm smiles from their oji-sans (“uncles”), and bags bursting with goodies, kiddies will be greeted with this announcement tacked to the side of the entrance:

“Unfortunately, due to various circumstances our annual Halloween event is cancelled this year. We are looking forward to next year, when we hope to be able to run the event again. -Yamaguchi-gumi”

Why the sudden change? The local police suspect that this is the result of several of the organization’s branches breaking off from the main body last month. With possibility of a gang war breaking out in the streets, much more so in the middle of a vulnerable holiday (such as Halloween), it’s understandable why the main branch decided to protect these kids and cancel trick-or-treating. Better safe than sorry.

Strange and unsettling as it is to see this crime syndicate care this much about children, and even use their official Twitter account to make the above announcement, you can’t deny that these Yakuza also have good hearts in them, too.

Shake It With the #Candybowl Dance Craze for Halloween