Thai elephants are amiable, curious creatures with long memories. They learn quickly, enjoy playing and hanging around their tight-knit families, and understand the importance of relationships and teamwork. These gentle giants are just like people, too.

So when a herd of elephants round up on an unexpected motorist puttering along a road in Khao Yai National Park, what caused their irate behavior?

This incident, which occurred on a road to Prachin Buri near Km 32, was actually more a case of being in the wrong place at the wrong time.

Many motorists choose to go through the national park’s roads, causing the wildlife in the area a lot of stress and annoyance. that day, 20-30 cars were backed up on the road; park staff cleared the mess up, only to be greeted with twenty more cars headed in the opposite direction. To make matters worse, “big bikes” came speeding along the road and making a lot of noise and unnecessary disturbance for a matriarch elephant and her brood.

The elephants started screaming and chasing the big bikes, only to be left behind. Unfortunately for a small motorbiker trundling down the road a ways after the big bikes, this herd’s memory was long enough for them to unstress on the hapless motorist as they gathered around him, expressing their annoyance and discontent. 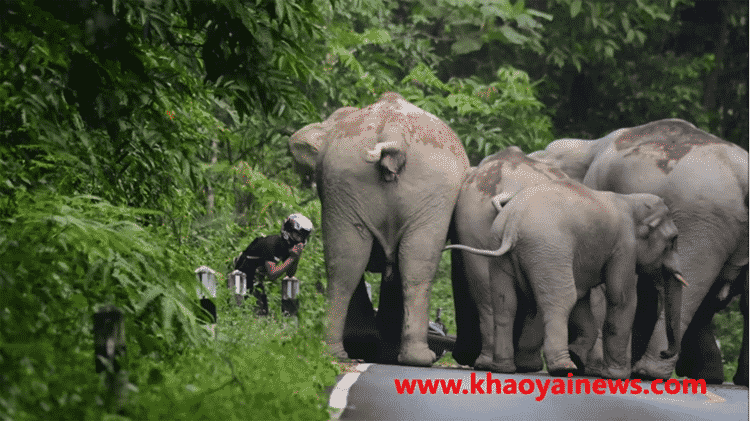 Watch for the tell-tale signs of the elephant’s stress and anger: raised, stiff tails; angry trumpeting, and ears stiffly held out to the sides.

In the face of such anger, the motorist made the wise decision to back down and show the herd the respect they deserve. Thankfully, the elephants backed down and allowed the motorist to ride to safety beside one of the park’s authorities. The matriarch and her herd did not give chase after they expressed their annoyance.

This has not been the only incident of elephant rage to happen in Khao Yai National Park due to traffic and noise. Pick-up trucks and cars have also received the brunt of these pachyderms’ well-earned anger in the past. Authorities are still finding alternate routes for motorists in order to keep the peace between man and beast.