Remember that post we did yesterday about when someone cosplayed Kim Jong Un at a sushi restaurant for an anime convention? It is with deep regret we say  that will probably be the last post we’ll ever write about the glorious Supreme Leader.

For the social media hubs over in China, it definitely is. 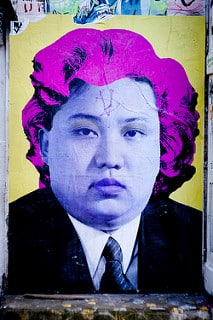 Memes of the despotic leader photoshopped in all sorts of wacky situations — from donning crazy wigs and makeup, to hilarious tours in his eternal search for cake, to his face superimposed on other meme videos — these laugh-a-minute posts are dime-a dozen on sites like Weibo, Baidu, and more. Unfortunately, the Chinese government is stepping in to put all the fun to a halting stop.

A visit by China’s Politburo Standing Committee to Pyongyang last week launched the campaign to mend North Korea’s image as a means of strengthening diplomatic ties, according to a news site. Soon, a news article was run through various channels imploring netizens to cease making fun of Kim — practically the first time this has happened on an official basis. Social media sites have also begun censoring uploads for offensive content, specially posts lambasting the dictator.

Popular searches to enforce the campaign often started with “Fat Kim the 3rd” (or 金三胖) , and led to as many as 1.7 million search results last year. Why all the fat jokes? A Chinese news outfit reported that he had gained so much weight during his career, his ankle broke under the pressure.

So I guess Weibo isn’t going to to be seeing any of this sort of comedy no more.

How about this one? Nope, sorry.

And definitely, not this video below.