We’ve got a new Twitter hero in town folks, and she ain’t chicken to say what’s on her mind.

Well, actually, she is — she’s a literal chicken, after all.

Meet Betty, the newest (and fluffiest) spokesperson of Chicken Treat, an Australian fastfood chicken  chain that’s captured the curiosity of the collective netorati with their newest PR-person-slash-mascot.

This brand-new ad campaign has set dear old Betty to type out tweets for as long as she can until she’s put together a real five-letter English word. Her attempts so far has created a string of letters, numbers, and punctuation, as well as the tasteful addition of the three-letter word “bum”. 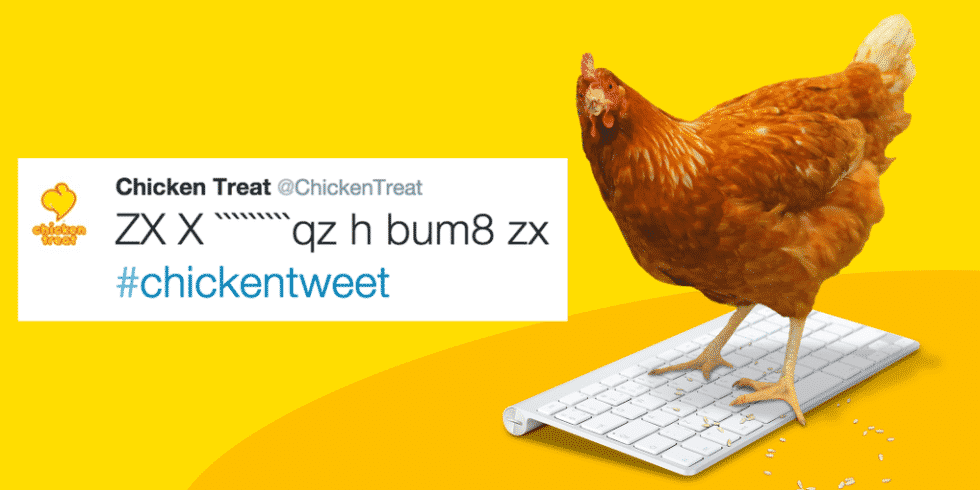 Let’s take a glimpse at some of Betty’s online linguistic stylistics:

Indeed, brevity is the soul of wit.

See her wax poetic a la e e cummings. It’s enough to move us to tears.

She may even just give Stephen King a run for his money with the heightened suspense she can pack — and below 140 characters!

while we do love the Twitter antics of this little chicken, we do have one concern, though — If Chicken Treat says she’s to be their Twitter mascot until she hits on a five-letter English word, what happens to her when she actually, finally does? Does she end up joining the rest of her crispy, deep-fried, juicylicious bretheren?

Ahahahahha! Of course not! They’d never even dream of doing such a thing… right?

Watch her introduction below:

Betty just might give Birds Rights Activist a run for his money. (Maybe that’s why he’s upping the ante and running for president?)