These 3 Dumb Criminals Got Caught After Posting to Social...

Not every criminal can claim the title “evil mastermind”. In fact, very few can. Want poof? How about these three dumb criminals who got themselves caught by posting on social media? Perhaps it was narcissim, which actually is the hallmark of some great criminal minds, or perhaps it was sheer clueless-ness that did them in. One thing is for certain: these people won’t be defending themselves from the likes of Superman, Bruce Wayne, or Tony Stark any time soon. More likely, they’ll spend their lives defending themselves against their own stupidity.

Oh, Instagram. It’s a photo-sharing app dominated by selfies, selfies with babies, and selfies with food. Oh, and don’t forget all those nifty filters.

Instagram is also a haven for stupid criminals. Take Troy Maye and Tiwanna Thomason, a Florida couple that authorities deemed “the Bonnie and Clyde of identity theft.” But while Bonnie and Clyde were undeniably charming folk heroes, Troy and Tiwanna were more like the bumbling bad guys Adam West fought in the 1966 Batman TV series. And their “WHAM” moment came after Troy uploaded a picture of his steak to Instagram.

After the duo were caught (after making a similarly hapless blunder by turning over evidence of their crimes to an undercover officer), prosecutors were able to use the Instagram photo as evidence. Geotracking data placed the dynamic duo in the right place at the right time, and the rest is history. Think about THAT next time you’re ordering a steak and plotting to steal thousands of identities.

This may be the age of video blogger (We refuse to use the term “vlogging,” and you should, too.) but there are some things you just shouldn’t share with the world. Nobody wants to know about the epic bowel movement you just had after downing all that queso a week ago. Nobody wants to see your newborn baby if it’s still covered in sticky mom-juice (seriously, just wipe it down first), and you should probably avoid announcing to the world that you just “got, like, so stoned out of my mind lol blaze it.”

There’s something else you really, really shouldn’t share with anybody — that you just broke into a car, stole a car, and robbed a bank. Yeah, the authorities tend to frown on that kind of behavior.

But that’s exactly what 19-year old Hannah Sabata did. After committing said crimes, she uploaded a YouTube video proudly confessing to all of them. Even dumber: she used a YouTube account that displayed her real name. Unsurprisingly, she was arrested a few hours later. Her stupidity was enough to shock the local sheriff, who stated: “I’ve been a sheriff for 19 years, and in law enforcement for 42 years, and I’ve never seen anything like this.”

In the criminal community, it’s generally considered bad form to commit crimes against cops. Not that there’s any kind of moral prohibition against it, just that it’s almost universally seen as a very, very dumb thing to do. Police officers, after all, have access to a vast arsenal of resources to hunt the culprit down.

Then there’s the case of Michael Baker, who practically handed himself over to the cops on a silver platter after stealing gas from a police cruiser. Baker, who was 20 years old at the time, posted a photo to Facebook of himself siphoning gas from a local police car. He was also flipping the bird to the camera and smiling. He wasn’t smiling all that much in his mugshot, but that’s neither here nor there. 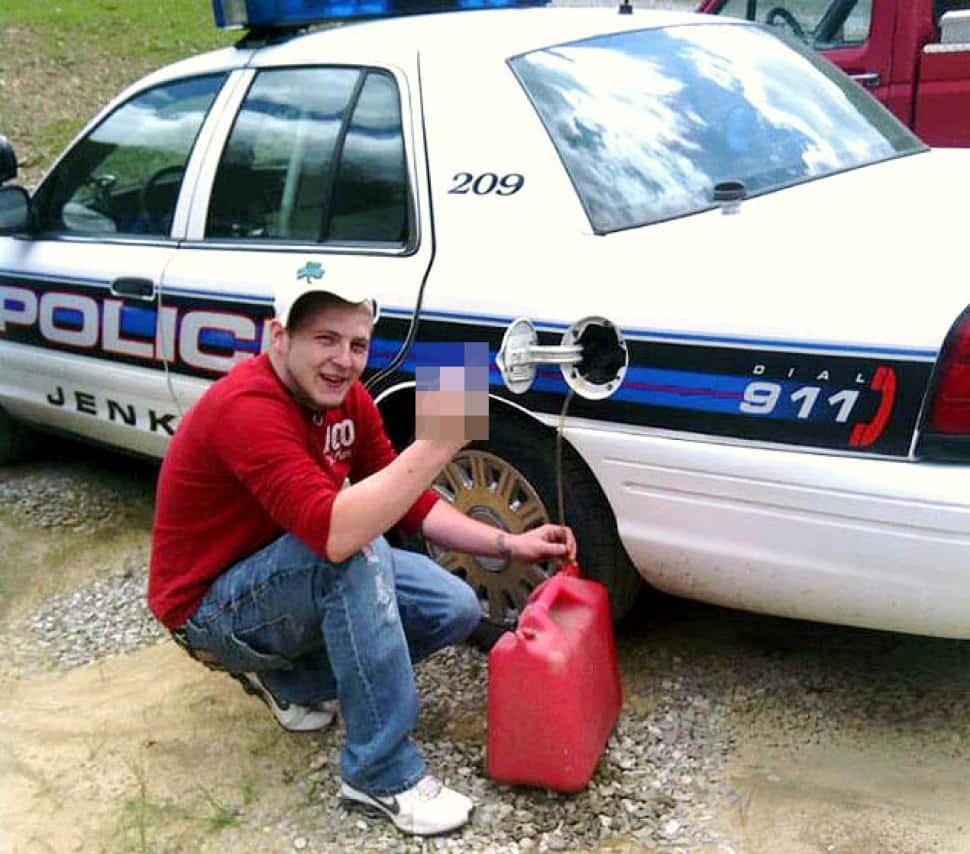 In any case, the best Phoenix criminal attorneys in the world wouldn’t be able to do much for Baker, whom police immediately arrested. The stupidity continues, however: after being arrested and presumably being let free on bail, Baker again posted to Facebook, this time saying: “Lol i went too jail over Facebook.” The future of our country is looking bright.