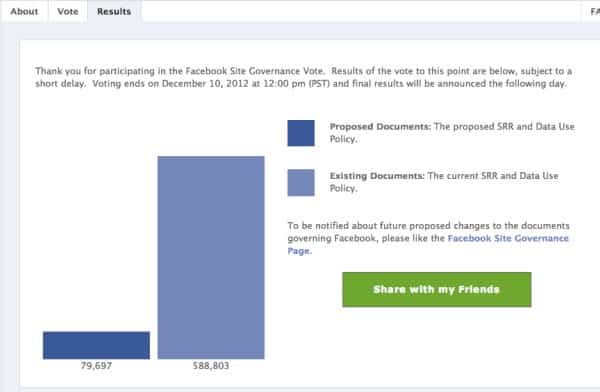 The Facebook Site Governance Vote ended today at noon Pacific time and the proposed changes will be implemented. Here were the changes proposed:

Even though 668,500 users voted with 588,803 not in support, the social network required 30 percent of total users (currently 300 million) to vote against the Facebook Site Governance change in order for it to be rejected.

This requirement makes it incredibly difficult for users to truly make their vote count as the largest vote prior saw a turnout of just 665,000 people. Moving forward, Facebook’s Chief Privacy Officer Erin Elgan will take questions and host live events where users can provide feedback.

With the ability to share data to and from affiliates, this means that your Facebook data can now be used by Instagram. With access to personal information such as gender, location, interests, and more, the image-based social network will be able to better target ads when they decide to finally monetize.

In the Facebook Site Governance changes, it wasn’t specified what Facebook meant by changing who can contact you through Messages. This has led some users to believe that advertisements are coming to Messages. That’s speculation at this point and the social network has been quite busy with other products such as Promoted Posts.

With the end of the Facebook Site Governance vote comes big changes to how the site operates.

The Blood Test, The Swab Test, and The Saliva Test      Essentially, there are three general types of COVID-19 testing produced so far. One is the rapid test, the second is the saliva test and the other is the swab test. The rapid test (also known as the anti-body test) uses blood samples. The swab test… END_OF_DOCUMENT_TOKEN_TO_BE_REPLACED

The COVID-19 pandemic is one of the biggest modern pandemics known in history. Currently, there are more than five million confirmed cases in the world, with a total of 333,000 deaths. A total of 1.6 million of these confirmed cases are in the US alone. The world is currently in a race of finding a… END_OF_DOCUMENT_TOKEN_TO_BE_REPLACED

Despite concrete data and research, people’s opinions will always be diverse when it comes to a variety of topics including religion, politics, gender, and more. Denial is a common reaction to many important discussions and serious world events. The COVID-19 pandemic does not differ from any issues and is subject to opinions from critiques all… END_OF_DOCUMENT_TOKEN_TO_BE_REPLACED

Back in January, when the Wuhan, China coronavirus broke out, it didn’t make it to the front page of newspapers, in print or virtual form. Today, January feels like a lifetime away. Like it or not, people around the world have adapted to the new normal – staying at home, frequent hand washing, and social… END_OF_DOCUMENT_TOKEN_TO_BE_REPLACED

Since the beginning of the year 2020, the whole world has been stupefied by the rapid spread of a deadly coronavirus known as COVID-19. World superpowers in the West were unable to prevent the virus from reaching their borders. Because of this fact, the novel coronavirus COVID-19 became a world-wide pandemic no less than three… END_OF_DOCUMENT_TOKEN_TO_BE_REPLACED

For months since the start of 2020, the attention of the world has focused on immediate response efforts to contain and combat the novel coronavirus, also known as COVID-19. The deadly virus has pushed millions of people into isolation.  This kept people in their homes for weeks and months away from their work, their friends,… END_OF_DOCUMENT_TOKEN_TO_BE_REPLACED